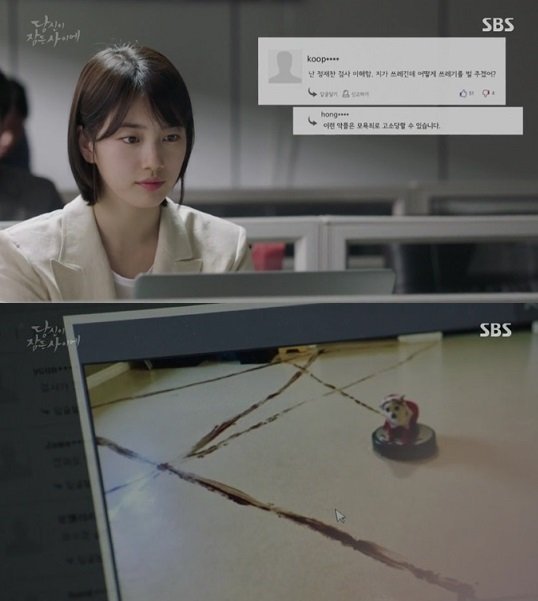 On the latest episode of the SBS drama "While You Were Sleeping - 2017", Jeong Jae-chan's (Lee Jong-suk's) personal information was leaked online and he suffered from criticism about the way he dealt with a case.

Nam Hong-joo (Suzy) saw the gossip and was angry. She warned them that they could be sued for saying such bad things.

However, netizens didn't stop and mocked that Jae-chan's poor skills will get them out. When Nam Hong-joo asked if they had evidence of his poor skills, they continued to criticize him saying, "Investigate your case if you have time to write comments".

Meanwhile, Nam Hong-joo who discovered a trace of blood that looked geometrical, guessed it was because of the robot cleaner. She found it with Han Woo-tak (Jung Hae-in) at a waste dump.

"[Spoiler] "While You Were Sleeping - 2017" Suzy sees Lee Jong-suk's criticism "
by HanCinema is licensed under a Creative Commons Attribution-Share Alike 3.0 Unported License.
Based on a work from this source