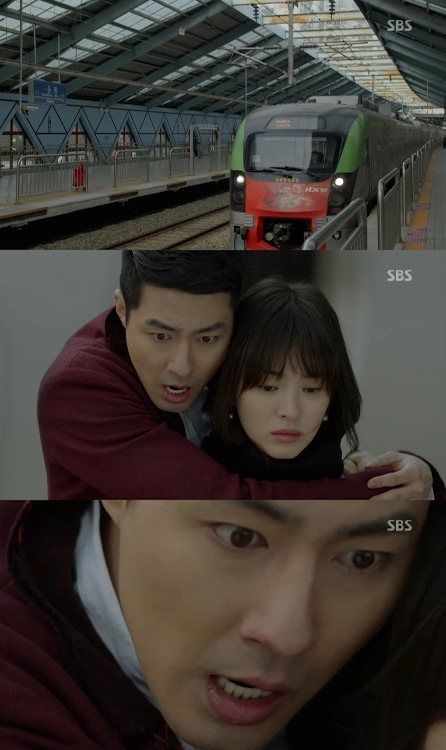 Oh Soo (Jo In-sung) saved Oh Yeong (Song Hye-kyo) who was in danger of being hit by the subway train on the third episode of the SBS drama "That Winter, the Wind Blows".

Oh Soo pretended to be Oh Yeong's real brother Oh Soo because of the threat calls she was getting to pay back 7.8 billion won.

Oh Yeong didn't have much meaning in life and she got up when she saw the oncoming train. Oh Yeong said, "If the reason you came to me is money, it's now. Shove me towards that".

Oh Yeong walked towards the oncoming train. The moment she was about to be hit by it, Oh Soo pulled her back in.

Oh Yeong was alive and Oh Soo's narration was heard saying, "I met a woman who wants to die. We are different but we were the same at that moment. I was curious about her for the first time".

"[Spoiler] "Wind Blows" Jo In-sung saves a suicidal Song Hye-kyo"
by HanCinema is licensed under a Creative Commons Attribution-Share Alike 3.0 Unported License.
Based on a work from this source