Sports flick 'As One' targets patriots 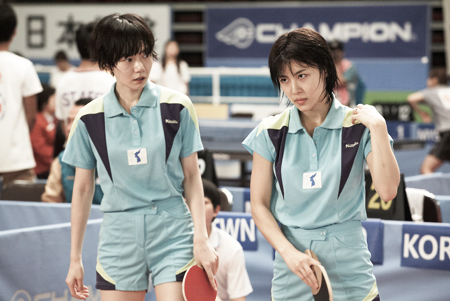 Actresses Bae Doona, left, and Ha Ji-won in a scene from the new movie "As One" (Courtesy of CJ Entertainment)

It was the beginning of 1991, when the South and North Korean governments made an unprecedented attempt to warm relations by fusing their national sports teams together. After a couple of months, the unified Korean table tennis team broke the Chinese stranglehold on the highest podium of the world championships.

Coming to theaters in May is a film that tries to recreate the gold-medal-winning chemistry, titled "As One".

Plugged simply as "Korea" in the national market, it is easy to see through the market-driven formula, following the well-trodden gilded path walked down by other sports-themed works of recent years.

It shamelessly panders to sentimental patriotism and sports aficionados' nostalgia, like its older siblings before, such as "Forever the Moment" (2008) and "Take Off" (2009), which took on handball and ski jumping as their respective subjects.

The sweat- and tear-soaked trail to victory is a virtual guarantee for commercial success, especially with Chungmuro's most wanted actress du jour Ha Ji-won and acclaimed risk-taker Bae Doona on the marquee.

But for the true-life Olympian, world champion and national heroine Hyun Jung-hwa (played by Ha), there is no room for calculations or cynicism. It is project dear to her heart.

"When the head of the studio and director Kim Jee-woon approached me about a movie based on those days, I was very happy", she said at a promotional press conference a week ago. "I actually asked them why they came so late, since this story is more genuine than the other recent sports films".

Kim, originally slated to direct the feature, was later replaced by Moon Hyeon-seong, who makes his debut with "As One".

Reflecting her enthusiasm, Hyun, as well as other players active at the time, put in painstaking efforts to make every scene and detail as authentic as possible.

They participated in all aspects of production from the beginning to the end, said Moon. Hyeon suggested the casting choice of Ha, and the retired athletes all availed themselves to on-set coaching sessions - for three months. Right-handed Bae had to learn how to play with her left to stay true to the playing style of her character, the North Korean table tennis star Li Bun-hui.

The conflict and the subsequent friendship budding between Hyeon and Li form the principal arc of the film's narrative.

At the press conference, the two lead actresses admitted to feeling a kind of oomph when they first read the scenario.

"It was like a punch to the heart", said Ha.

Local filmgoers can see that power in action in about a month. Pundits predict a monster hit.

"As One" (Korea) opens in theaters nationwide in May. Visit www.asone2012.co.kr for more information. Distributed by CJ Entertainment.

"Sports flick 'As One' targets patriots"
by HanCinema is licensed under a Creative Commons Attribution-Share Alike 3.0 Unported License.
Based on a work from this source