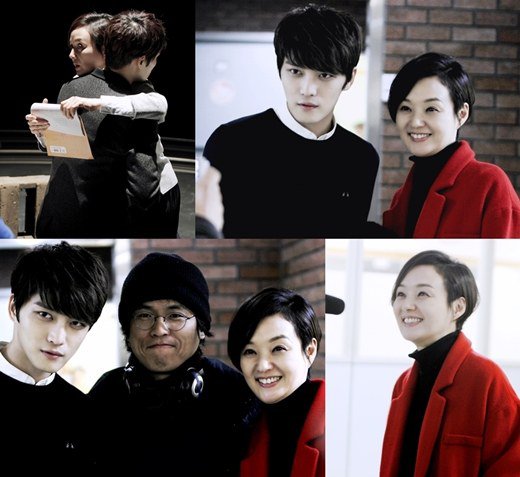 Bae Jong-ok released pictures from the final scene of the drama "Spy - Drama".

KBS 2TV drama "Spy - Drama" actress Bae Jong-ok played a mother who gets back into her old habits of being a spy her children's sake. The drama ends today.

The pictures show Bae Jong-ok posing with her dearest children Seon-woo (Kim Jae-joong). In the final scene where she's desperately clinging onto her son, she gave off the vibe of a mother who loves her son so much.

Baek Jong-ok also revealed pictures with producer Han Sang-woon. Together, the three of them are smiling ever so brightly.

Meanwhile, "Spy - Drama" is based on the Israeli original drama "MICE" about a mother who risks her life to save her son and a son who realizes the true identity of his mother who used to be a spy.

""Spy - Drama" Bae Jong-ok and Kim Jae-joong's friendly shot"
by HanCinema is licensed under a Creative Commons Attribution-Share Alike 3.0 Unported License.
Based on a work from this source