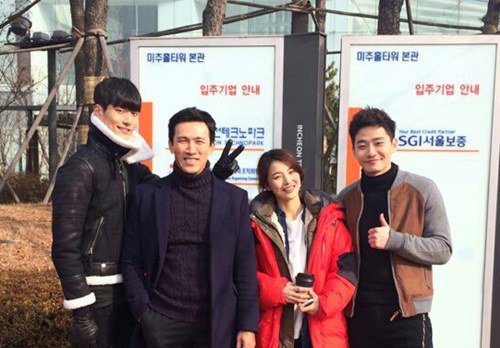 Jang Woo-hyuk posted the picture on Instagram saying, "I've been watching Yoo Oh-sung since I was a child and I wonder if I am dreaming right now because I get to work with him finally. He's given me a nickname and advises me without hesitation. Also, thank you, Yong-hyeon and Yoo-ra!

The picture shows the South team of "Spy - Drama" smiling brightly at the camera. From Yoo Oh-sung, the head of the team to his men Jang Woo-hyuk, Choi Yoo-ra (Hong-ran) and Choi Yong-hyun-I (Hong-goo).

Jang Woo-hyuk is the action head of the team and in real life, he's the youngest one out of the team. He shows great teamwork and affection for the team.

Yoo Oh-sung becomes a totally different person behind the camera and takes such good care of his fellow cast. It's impressive to see Jang Woo-hyuk standing close and friendly next to Yoo Oh-sung while smiling so brightly with a V.

Jang Woo-hyuk has been marked for his outstanding performance in "Spy - Drama" and has earned the nickname 'female targeting spy'.

The thirteenth and fourteenth episodes of "Spy - Drama" can be seen on the 27th at 9:30PM.

""Spy - Drama" Jang Woo-hyuk, "Working with Yoo Oh-sung is a dream""
by HanCinema is licensed under a Creative Commons Attribution-Share Alike 3.0 Unported License.
Based on a work from this source