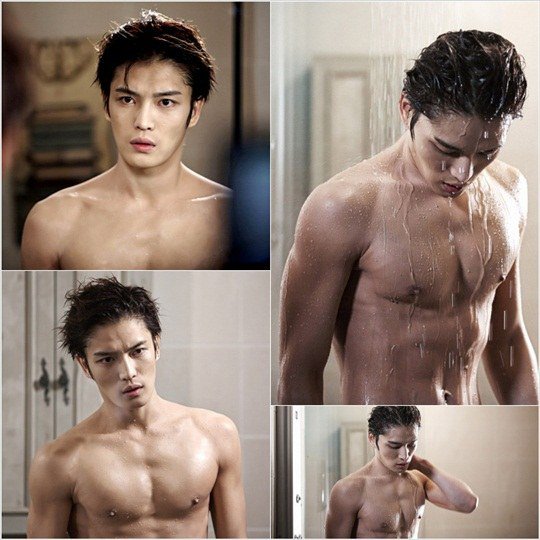 Kim Jae-joong was seen half naked in a shower scene in "Spy - Drama".

Pictures of Kim Seon-woo were released by the productions on the 16th.

Kim Jae-joong takes on the role of Kim Seon-woo, an intelligent and government agent with excellent analysis skills. Kim Seon-woo follows the rules but in front of his mother Hye-rim (Bae Jong-ok) and his girlfriend Yoon-jin (Ko Sung-hee), he is charming.

Kim Jae-joong in the picture is standing in the running shower with his tight abs showing. His wide shoulders and flawless body is expected to have women drooling over him.

The shower scene was taken in a set in Suwon on the. Seon-woo takes a shower to think about Soo-yeon (Chae Soo-bin) whose mission he is supervising. Kim Jae-joong said, "I didn't have time to work out separately before filming".

However, unlike his excuse, his body was near perfect when he took off his clothes to get ready for the scene. Even the male staff were in awe. Kim Jae-joong seems to have melted into his character well and managed to perform the shower scene well.

However, since he perfected the scene in such a short time, the staff were disappointed and producer Park Hyeon-seok joked that they should do it again for the sake of the staff.

Meanwhile, on the second episode of "Spy - Drama", Ki-cheol (Yoo Oh-sung) used Hye-rim's video of her leaving an explosive bag in the subway to threaten her son Seon-woo's life.

Hye-rim is surprised to hear that her son is not an ordinary agent but in Special Forces and the layout of the story increases tension for future episodes.

""Spy - Drama" Kim Jae-joon's broad shoulders and tight abs"
by HanCinema is licensed under a Creative Commons Attribution-Share Alike 3.0 Unported License.
Based on a work from this source