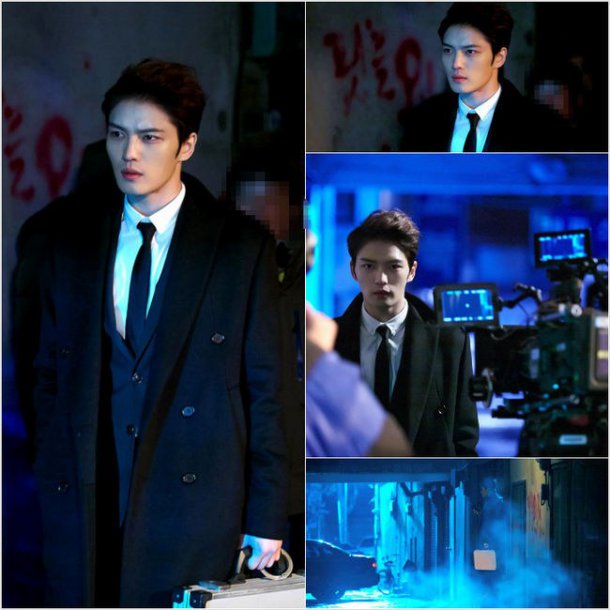 Kim Jae-joong takes on the role of government agency Seon-woo who follows the rules in the new KBS 2TV drama "Spy - Drama". He's cool and level-headed when it comes to work but he's loveable to his mother Hye-rim, played by Bae Jong-ok. He gets into romance with Ko Seong-hee in the role of Yoon Jin.

Kim Jae-joong appeared neat in a suit holding a briefcase. His expression is serious as he looks around him in the dark alleyways. He looks tense as he plays the role of genius agent Seon-woo.

Kim Jae-joong's cut was taken in an alleyway in Incheon on the 21st. Despite the early hour, Kim Jae-joong appeared with a smile on his face and greeted all the staff. He went through his routine thoroughly before the camera started rolling. The suit he was wearing emphasized his broad shoulders and his hair was slicked back to reveal his handsome face.

There were several scenes where he had to speak in Chinese. Thanks to his effort, Kim Jae-joong pulled off all Chinese-line scenes without a single NG. When his mouth froze due to the cold weather, he kept a thermos bottle of warm water around him. He showed a lot of effort in every little thing he did.

The staff said, "Despite the cold weather and the long hours, Kim Jae-joong didn't show signs of exhaustion and did well. He stayed up all night for a good result so hopefully the anticipation is even greater".

Meanwhile, "Spy - Drama" is based on an Israeli original about a mother who risks her life for her son who finds out about his mother's past. The first episode can be seen on the 9th of January and two episodes broadcast in a row every Friday.

""Spy - Drama" Kim Jae-joong in a suit"
by HanCinema is licensed under a Creative Commons Attribution-Share Alike 3.0 Unported License.
Based on a work from this source