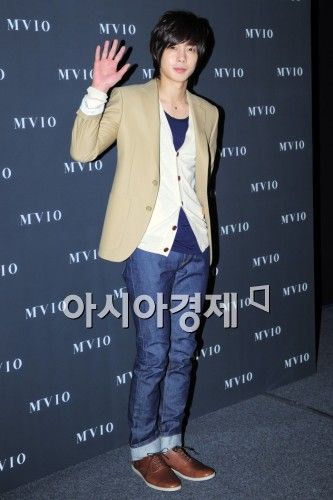 Korean singer-actor Kim Hyun-joong is in talks to appear in the upcoming action TV series "ATHENA", the spin-off to last year's hit blockbuster drama "IRIS", according to the show's producer Taewon Entertainment on Tuesday.

"Kim is a strong candidate for the drama but we are currently in talks with his agency and nothing has been set as of now", a representative from Taewon told Asia Economic Daily over the phone.

An official at Kim's agency DSP Entertainment expressed more optimism on behalf of the 23-year-old star. "We can't say anything is certain but Kim has shown great interest in "ATHENA" and it is true that he wants to take the role".

Taewon is eyeing the latter half of this year for the airing of "ATHENA", about terrorist acts and threats against the Korean Peninsula and the world.

It will go into production starting in June in Italy and Switzerland and continue on into six other countries including Singapore and New Zealand.

Kim made his debut in 2005 as the leader of the five-member boy band SS501 and has also ventured onto the small screen appearing in the smash-hit drama "Boys over Flowers" last year alongside actors Lee Min-ho and Ku Hye-sun.

He is currently focusing on his singing career with his group who will be returning to the local music scene with a new album at the end of the month.

"SS501 Kim Hyun-joong considering "IRIS" spin-off"
by HanCinema is licensed under a Creative Commons Attribution-Share Alike 3.0 Unported License.
Based on a work from this source