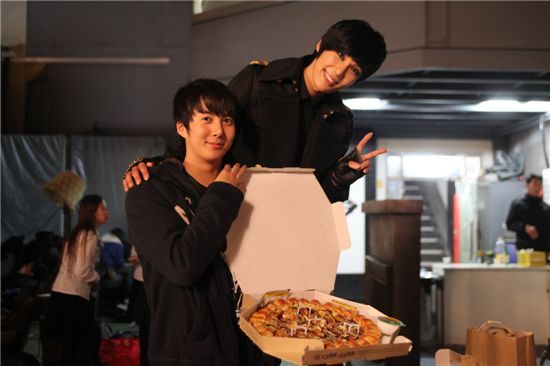 From left, SS501 members Kim Hyung-jun and Park Jung-min-I pose for the camera on the set of Park's music video shoot in the Gyeonggi Province of South Korea on November 15, 2010. [CNR Media]

"Kim surprised Park by visiting the set with his hands full of food after hearing from his manager that Park's producer said he was filming the video", explained an official with CNR through a press release.

Park and Kim both debuted through their five-member boy band in 2005 but found new nests after their contract with DPS Media expired in June this year; Kim with S-Plus Entertainment, Kim Hyun-joong with KEYEAST and Kim Kyu-jong and Heo Young-saeng with B2M Entertainment.

While the five have started to pursue individual careers, not only in singing but also acting, all five singers have assured fans that SS501 will not disband.

Most recently, Park has been busy preparing for his solo music career in Korea which kicks off with the release of his album on November 25.

"SS501 Kim Hyung-jun visits Park Jung-min-I on MV set"
by HanCinema is licensed under a Creative Commons Attribution-Share Alike 3.0 Unported License.
Based on a work from this source