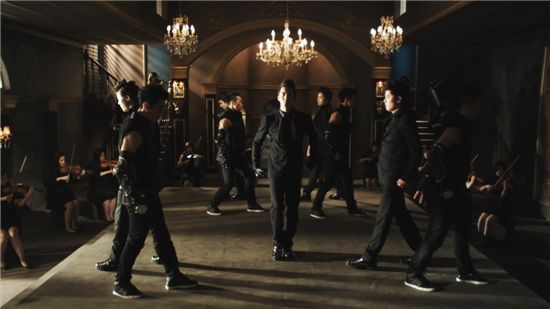 Korean idols SS501 have released the full version of their music video on various portal sites starting yesterday, according to their agency DSP Media on Tuesday.

The music video for their title track "Love Ya", from their new album "DESTINATION, featured the boys wearing black suits while performing on an antique stage surrounded by a string orchestra.

"DESTINATION", which became available for online preordering on May 24, had topped record distributor's Yes24's daily chart in just a day while "Love Ya" reached No. 1 on numerous real-time online music charts.

The special version of the album, containing 'before & after' photographs of the boys looking natural versus wearing European suits, went on sale last Friday while the regular version showing them sporting white and black clothes will be released on Thursday.

To thank their fans, the five-man band held an autograph session in Busan and Taegu last weekend.

SS501 made their debut with the single "Warning" in 2005, releasing numerous albums as a group and pursuing individual careers in acting and appearing in variety shows.

They are currently gearing up for comeback performance on KBS' televised music program "Music Bank" on May 4 and the following day on MBC's "Music Central".

"SS501 releases full version of new music video "Love Ya""
by HanCinema is licensed under a Creative Commons Attribution-Share Alike 3.0 Unported License.
Based on a work from this source