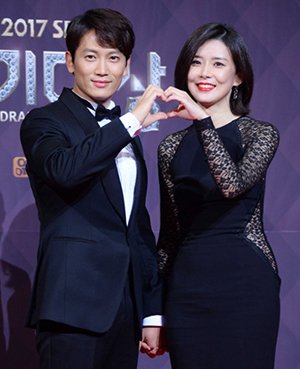 The two married in 2013 after six years of dating. They had their first daughter in June 2015.

After their marriage, Ji and Lee still remain popular as both showed off their impressive acting skills in several hit TV dramas.

Lee received rave reviews for her role in the TV series "Mother - Drama" early this year. Ji is currently appearing in a romantic comedy "Familiar Wife" on a cable channel and his new film "Fengshui" is set for release in September.

"Star Couple Expecting 2nd Child"
by HanCinema is licensed under a Creative Commons Attribution-Share Alike 3.0 Unported License.
Based on a work from this source