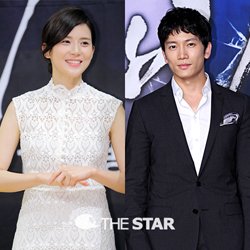 Celebrity couple Lee Bo-young and Ji Sung, who tied the knot in late September, have been voted actors of the year in a nationwide poll of 1,702 people aged 13 or older by Gallup Korea.

Lee ranked first with 11 percent of the vote and Ji placed second with 8.1 percent.