Star Power Not Enough To Create A Hit Movie 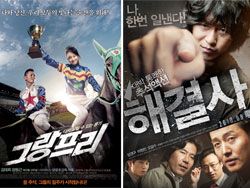 It's safe to say that the success of Korean movies used to be mainly dependant on star power. Regardless of how original a plot line was, how well the production was made, and how cleverly written a script was, none of it mattered as much as how big the names of the stars involved were.

However, that's slowly but surely changing. Now, just because you have some of the most well-known faces in the industry does not mean a movie project is guaranteed success. Directors and producers are starting to realize the importance of meeting the needs and desires of their movie-goers. They're starting to rely on the power of word of mouth and using blogs and cafes as significant resources to tip them in on which direction to take their projects in.

Whereas casting directors would often take big name actors, no questions asked before, nowadays they're taking into consideration how well these actors would match the characters in the movie. This is after realizing that a pretty face cannot carry an entire production alone.

Take popular actress Kim Tae-hee. After making her big-screen comeback through "Grand Prix", it's clear that her beautiful face and widely-acknowledged intelligence just isn't enough when it comes to boosting box office sales. After selling a little over a mere 160,000 tickets thus far, the movie is expected to clear out of theatres without creating much of a buzz. It was at about 15th place in box office rankings for weekend ticket sales (October 1-3), attracting only about 1,793 people. Also, her presence, which is enough to cause quite a stir on any street of Korea, just doesn't have what it takes to make a notable impression at film festivals.

This is similar to the lukewarm response in 2007, for Kim's film "Venus and Mars". She starred alongside Sol Kyung-gu and the two stars only managed to attract about 340,000 viewers. This is nothing compared to the 1.45 million viewers that came out to see her and Jung Woo-sung in the 2006 film, "The Restless".

It's almost ironic because Kim has been showing more passion when it comes to honing her acting skills and going out of her way to promote her projects. The results are showing an inverse relationship to all of these efforts.

Another example is the collaboration between director Jang Jin and comedic actor Kim Soo-ro in the film "Quiz King - 2010". This project had been attracting a lot of attention, but the unenthusiastic results would've fooled anyone otherwise. It premiered in theatres at the most perfect time -- the long Chuseok holidays when families have more time to go to the theatres -- and was the only real comedy film too. Also, alongside Kim Soo-ro were other popular actors: Han Jae-suk, Im Won-hee, Ryu Seung-ryong, Jung Jae-young, Shin Ha-kyun, Ryu Deok-hwan, and Shim Eun-kyung. However, those factors alone did no good for the ticket sales. "Quiz King - 210" sold about 562,662 tickets in four days putting it at 10th place.

Surprisingly, a film that stars now real notable entertainers really shined at the theatres. The comedy "Delighted Delighted!" placed first out of all the other new movies and second overall at the box office the week of it's premier.

It seems that the success of projects are no longer in direct relation to the star power backing it up. Movie-goers are starting to pick and choose their films based on standards that have more criteria check points than simply "celebrity names". This is definitely going to require more effort and passion from the production teams and entertainers.