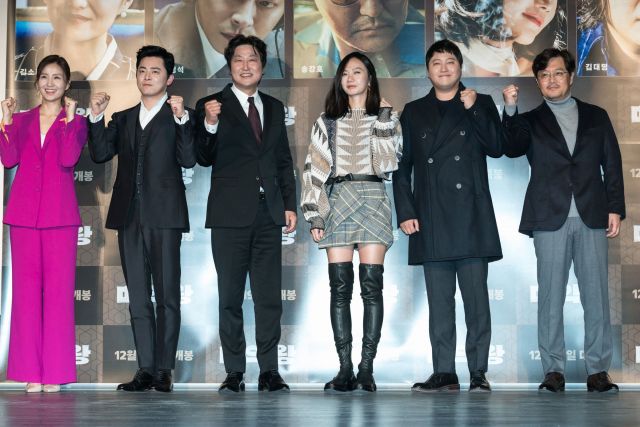 A new crime flick is raising expectations with its star-studded cast ahead of its release next month.

Based on the true story of a Korean narco kingpin in the 1970s, the film stars Song Kang-ho in the lead role, Jo Jung-suk as a devoted prosecutor determined to track him down, and Bae Doona as an influential lobbyist who helps the main character's drug business.

The three attended a press conference in Seoul on Monday along with other cast members and director Woo Min-ho.

Woo Min-ho said, "I didn't think this cast was possible. But I knew if we could get Song to participate, we could put together a great cast around him".

Song Kang-ho downplayed his importance to the film, however, saying, "Woo says he was able to cast other actors because of me, but that's not true. I think actors trust him. I think this is the first film to deal primarily with the underground drug world, although it has been partially addressed in many other films. I think the actors, including myself, were attracted by this".

Woo Min-ho's other works include "Inside Men", for which he won the best director award at the annual Daejong Film Awards in 2016.

The new film will hit local theaters on Dec. 19.

"Star-Studded Crime Flick to Hit Theaters Next Month"
by HanCinema is licensed under a Creative Commons Attribution-Share Alike 3.0 Unported License.
Based on a work from this source