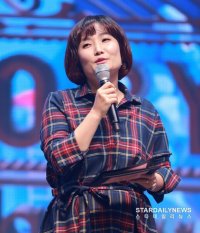 The two met last year at a KBS 2TV program the comedian was hosting and dated for about a year.

Fellow comedians Yoo Jae-suk and Park Soo-hong were the MCs at the wedding and Grand National Party presidential hopeful Lee Myung-bak was one of the many attendants.

Also at the ceremony were Guus Hiddink, the Dutch former coach of Korea's national soccer team, with his girlfriend Elizabeth as well as some one hundred celebrity friends including close buddies, singers Lee Soo-young, Jang Nara and Bada.

The couple is heading off to Bali, Indonesia, on Monday for their honeymoon.