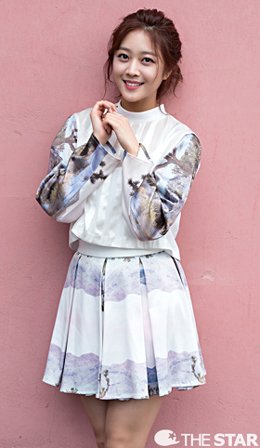 Jo Bo-ah is receiving positive reviews for her first major on-screen performance in "Innocent Thing", in which she plays a high school student who becomes obsessed with her gym teacher.

The actress said she hopes her portrayal of such a complicated character serves as a turning point in her career.

"I have been working hard on this movie for a long time, so I'm feeling quite nervous. I hope viewers like it", she said.

She described one scene in which she shared a bed with male lead Jang Hyuk as being one of the most daunting challenges of the production.

"There was quite a lot of pressure, of course, but I never planned on backing out of this scene as it was very important to the story. I wanted the character to be seen as a girl who was genuinely in love with this guy. Even though she may appear crazy, this was the way in which she expresses her love", said Jo.

"Acting is difficult but fun", she said. "You work hard to overcome one problem, then it becomes enjoyable, and then another challenge pops up. I think that's one of the main attractions of this profession".

The film, a suspenseful melodrama, follows Jo's character as her innocent love for a married schoolteacher turns into a mad obsession that shatters both his and her life. It was released last Thursday.