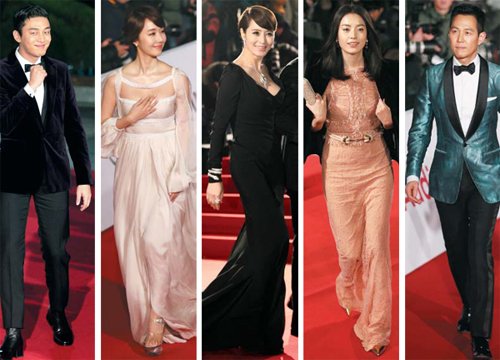 Top actors and actresses gathered for this year's Blue Dragon Awards on Thursday, after shunning the Daejong Film Awards, one of the most prestigious film awards, last week in a suspiciously coordinated boycott to protest organizers' poor management and lack of transparency.

The brightest stars were Yoo Ah-in and Lee Jung-hyun, who took the best actor and actress awards for their roles in "The Throne" and "Alice In Earnestland".

"I think I'm ill-suited for this kind of stage... I still can't believe this [award] is mine", Yoo said in his acceptance speech.

"I believe I'm here today thanks to all the love and support from the audience", said Lee, who eventually got through an emotional speech after bursting into tears behind the podium.

"I never thought I stood a chance because it was such a small-scale indie film and the other nominees are such great actresses. It's been almost 20 years since I was first recognized as an actress with "A Petal" in 1996, and won the best new actress award", she said.

The indie film "Alice In Earnestland" -- which tells with the story of a poor woman who lives a life devoid of hope as she struggles to keep up payments to the hospital that cares for her husband, who is in a vegetative state -- drew about 43,000 moviegoers.

"The Assassination", which depicts Korean independence fighters' struggle against Japanese colonial rule in the 1930s, won the best film award. 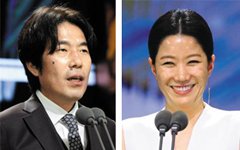 Oh Dal-soo (for "Ode to My Father") and Jeon Hye-jin-II (for "The Throne") won the best supporting actor and actress awards.

Domestic films attracted 98.52 million viewers as of Wednesday this year, and are on course to surpass the 100 million mark for a fourth consecutive year.

"Stars Come Together for Annual Blue Dragon Awards"
by HanCinema is licensed under a Creative Commons Attribution-Share Alike 3.0 Unported License.
Based on a work from this source