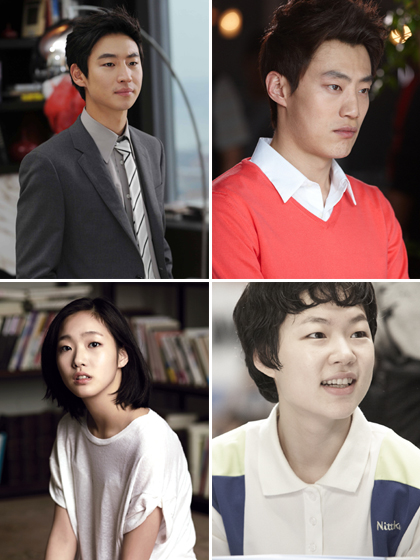 Lee Je-hoon became well known through a movie last year and this year Lee Hee-joon has been busy with dramas. Lee Je-hoon has done movies such as "Bleak Night", "The Front Line" and "Architecture 101" and he is currently starring in the SBS drama "Fashion King" as a bad tempered but soft-hearted plutocrat. Lee Hee-joon from the movies "Bleak Night" and "Helpless" is currently in the KBS 2TV drama "My Husband Got a Family".

Actresses from KNUA are also outstanding. Kim Go-eun who attempted at revealing herself and showed detailed emotional acting in the movie "A Muse" was earlier on picked out as the 'find of the year'. Han Ye-ri who was also acknowledged through her independent film, was spotted in the movie "As One" by playing a role as important as Ha Ji-won and Bae Doona as North Korean table tennis player Yoo Soon-bok.

Kim Go-eun told a reporter in an interview, "I chose KNUA where you can be active outside for 2 years while going to school so that I don't become impatient to become famous". Lee Je-hoon mentioned once that he quit university to act.

Lee Sun-kyun who graduated in the first class of the theater department of KNUA also said, "There are many students from KNUA who are active in plays and theaters. There are may who take their time to get noticed naturally so I support them.

"Stars from Korea National University of Arts"
by HanCinema is licensed under a Creative Commons Attribution-Share Alike 3.0 Unported License.
Based on a work from this source