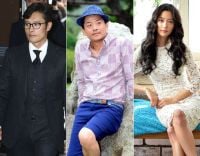 Threaten or be threatened, their image breaks overnight.

Actor Lee Byung-hun, comedian Kim Jun-ho and actress Clara have been trending a lot these days. How do the netizens see them? Sports Donga and Story Dot analyzed information about these people.

From the 3rd of August 2014 to the 3rd of February, their names were followed by words like 'character' and 'group'.

The other most frequently appearing words are 'location', 'product', 'quality', 'brand', 'hobby' and 'mentality'. These words prove how netizens look at these stars in danger.

-SNS talks about the blackmail

It's true that the public is very disappointed with Lee Byung-hun's 5 billion-won blackmailing incident. It's partly because of his language. Sports Donga and Story Dot made a 6-month analysis which showed that the public would not abandon him for his past, present or future actions.

Lee Byung-hun was greatly affected by this case. The word that relates to him most on SNS is 'blackmail' which recorded a number of 18,635 times. Second came the name of the model who claims that they were in a relationship with 16,688. From third to fifth place is Da-hee who accompanied the model in this crime and then came 'case'. Lee Byung-hun's wife Lee Min-jung was the fifth most mentioned when it came to Lee Byung-hun.

Mentally related words to Lee Byung-hun are, 'not easy', 'crime', 'adultery', "Scandal" and other negative words. They take up 39.3% of the total calculation. This shows how disappointed fans are. However, positive remarks of Lee Byung-hun about his acting take up 29.4%.

● Kim Jun-ho, Coco Entertainment
Words like 'shut down', 'embezzlement' and 'debt' do not remind you of a comedian who brings you laughter.

Truth about co-founder of Coco Entertainment, Kim's embezzlement came out on the 18th of December. The company then announced shut down on the 24th of January. Kim Jun-ho has no legal responsibilities but he was the co-founder and has moral responsibility over the comedians that were under him.

The day Kim Jun-ho's name was most searched on December 28. This was the day of the KBS Entertainment Award when Kim Jun-ho was nominated for the grand prize. Kim Joon-hyeon and Kim Ji-min comforted him and this brought about the words, 'sincerity', 'cheer' and 'touching'.

The most mentioned word around Clara is 'chairman'. This is the result of conflict between Clara and Polaris Entertainment.

Clara sued Chairman Lee on the 14th of January. It hasn't been a month since the issue but 'chairman' has been mentioned the most when it comes to Clara. He is also the third most mentioned in people around her.

Another brand that is mentioned most about Clara is 'Kakao Talk'. That's because the text messages she exchanged with the chairman is on Kakao Talk.

Clara was known as the online star for being more active in shows and photos. Related words to Clara are also Naver, Facebook, Instagram, Twitter and other SNS. Next come along words such as 'sexuality', 'body', 'pretty', 'photo shoot' and more.

"Stars in danger: Lee Byung-hun, Kim Jun-ho and Clara"
by HanCinema is licensed under a Creative Commons Attribution-Share Alike 3.0 Unported License.
Based on a work from this source