Stars Join in Mourning for Death of Actor's Brother 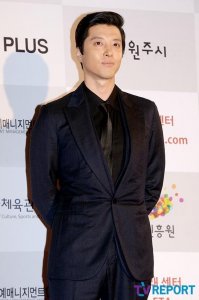 Numerous celebrities have joined in mourning for hallyu star Lee Dong-gun's brother at a chapel in Samsung Medical Center in southern Seoul.

Lee's brother, Lee Joon-yub, 19, was fatally stabbed near the World Square Shopping center in Sydney, Australia, March 20. He and his friend, who were both studying in Sydney, were attacked during an argument with two Chinese gang members. The 19-year-old's body was cremated in Sydney on March 26 and Lee brought back his brother's ashes to Seoul on March 28.

Actors and actresses, close to Lee, visited the chapel to convey their condolences over his brother's death.

Han Ji-hye, Lee's ex-girlfriend, visited the chapel and grieved with Lee and his family. She burst into tears at the sight of the brother's portrait.

Han was told the news after filming "Likable or Not" ("I Hate You, But It's Fine") a local hit drama ― now airing on KBS, and rushed to the hospital.

Korean fans were stunned to learn that the victim was Lee's brother, flooding Lee's homepages with messages of condolence.

After hearing of his younger brother's death, Lee, who had been very close to him, immediately flew to Australia along with his parents to claim the body and attend a requiem mass at the St John's College Chapel, at the University of Sydney, which Lee's brother had attended.

A memorial service will be conducted in a Catholic church on March 31.

"Stars Join in Mourning for Death of Actor's Brother"
by HanCinema is licensed under a Creative Commons Attribution-Share Alike 3.0 Unported License.
Based on a work from this source