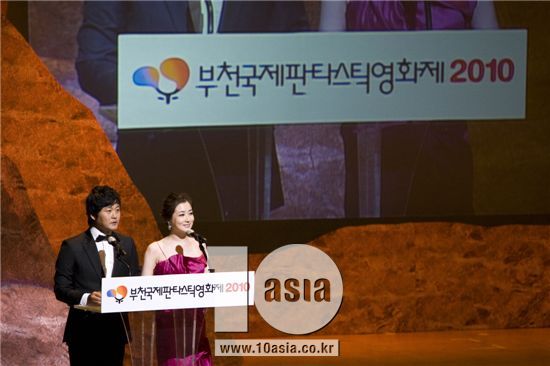 "Only humans can enjoy festivals and films are at the center of those festivals". The opening ceremony for the 14th Puchon International Fantastic Film Festival (PiFan) took place at Bucheon Citizen's Hall on Thursday evening. But the atmosphere, which had been dampened by the approach of the rainy season, lightened up as an array of stars, from near and far, took to the red carpet of the 11-day event.

Hwang Jung-eum, who has been selected this year's PiFan Lady after her predecessors including Kang Soo-yeon, Chu Sang-mi, Bae Doona and Ha Ji-won, received a warm welcome from the audience, as was Yoshiyuki Tomino, the father of anime metaseries Gundam. Fans cheered for director Ryoo Seung-wan and actor Ryoo Seung-bum, the brothers who arrived all smiles and and Kang Soo-yeon, Ahn Sung-ki, Shin Hyun-joon and Oh Ji-ho stepped onto the red carpet side by side like comrades stepping onto a battlefield. The highest decibels of screams burst out upon the appearance of heartthrob Go Soo, recipient of the fest's Fantasia Award.

At the opening ceremony hosted by actors Gong Hyung-jin and Choi Jung-won, newly established prizes -- namely the Actors Award and Fantasia Award -- were handed out. The Actors Award, where actors registered with the Korean Actors' Association choose the actor who best befits the PiFan, was handed to Ryu Seung-beom. In a strong and loud voice he remarked, "I will always work hard in a cute and fantastic way, as if I am the youngest in the film industry". The Fantasia Award, a title for the actors whose acting careers stood out the most for the citizens of Bucheon, went around to Go Soo who said he had "always come to Bucheon with a hat pressed on" and Cho Yeo-jeong who "received an award for the first time after debuting". The ceremonial event, signaling the start to a fantastic night, ended with a speech by director Paul Scheuring, helmer of opening film "The Experiment". The festival has just started. A total of 193 movies from 42 countries around the world are waiting to curdle your blood and chill the hot summer air. The PiFan runs from July 15 to 25.

"Stars light up opening day of Puchon film fest"
by HanCinema is licensed under a Creative Commons Attribution-Share Alike 3.0 Unported License.
Based on a work from this source