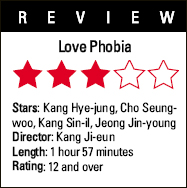 Most celebrity couples do everything they can to avoid having their relationship in the media spotlight. The exception to this rule is Cho Seung-woo and Kang Hye-jung, who not only seem to accept public interest in their relationship, but encourage it by starring as romantic opposites in a new film.

The drawing power of the couple is likely to be enough to make "Love Phobia" a commercial success. However, their celebrity status might make it easy to forget that Jo and Kang are in fact two of the more promising young actors working in Korea today. The film fortunately doesn't overlook this fact, and gives them plenty of opportunities to show off their skills.

Jo and Kang star respectively as Cho-gang and A-ri, a pair of young lovers whose courtship consists of three meetings in 20 years. They first meet in childhood _ a boy living in a small village (played by Park Gun-tae) and a young orphan girl who believes she is cursed (Byeon Joo-yon). For Cho-gang, it's literally love at first sight, and although A-ri seems to feel the same way, she keeps him at bay for fear of bringing him bad luck. It's a pattern that's repeated in their next two meetings as high school students and later as adults.

The story is fairly standard melodrama material, but the two stars make it work for most of "Love Phobia". The film is the first mainstream romance for Kang, best known for her roles in "Welcome to Dongmakgol" and "Old Boy". She brings a bit of depth to a potentially cardboard A-ri, especially in the subtle ways she shows the reasons behind the character's superstition.

As for Jo, who plays the perfect boyfriend who refuses to give up on true love, we've watched him play this part before in "The Classic". Fortunately, he fares much better in this film than in that sloppy drama, though some of his scenes are as saccharine as the actor's KT&G television commercials.

First-time director Kang Ji-eun does well in setting the film's pleasantly cute tone, even adding a clever camera angle or two now and then. But then in the latter half of the film, he commits a cardinal sin of filmmaking by using a long series of quick flashbacks to tell the audience what's "really" going on, destroying the minor magic created until then.

The film is so enjoyable up to that point that you want to like the rest. But it's hard to find much enjoyment in the predictably maudlin ending you've unfortunately seen so many times in the average melodrama.

"Stars Make It Difficult Not to Like 'Phobia'"
by HanCinema is licensed under a Creative Commons Attribution-Share Alike 3.0 Unported License.
Based on a work from this source