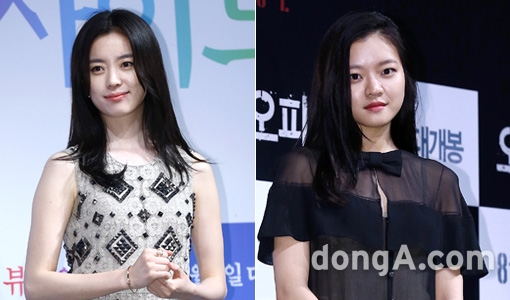 Han Hyo-joo and Go Ah-sung will join the summer movie box office race side by side.

These actress, going against Korean and Hollywood blockbusters like "The Assassination" and "Mission: Impossible – Rogue Nation", chose fresh genres not familiar to the Korea box office to do battle with.
Whether these actresses, who have proven their acting talents and ability to sell tickets in previous movies of theirs, will continue riding the wave of success they are on is of high interest.

Han Hyo-joo will be appearing in "Beauty Inside" (produced by Yong Film) opening on August 20th while Go Ah-sung will appear in "The Office" (directed by Hong Won-chan; produced by Flower Films) opening on the 27th. While there are many actors in the cast of both movies, the main protagonists are these two actresses.

The fact that the two actresses have difference approaches to their projects with one trying to consolidate her preexisting image while the other is trying to get away and create a new image is very notable.

Han Hyo-joo is going for consolidation. As an actress who dominated the melodrama movie scene over the past 3 or 4 years, she is showing off what she does best with "Beauty Inside". She is playing a woman who is the only one who believes and loves a man who changes bodies every time he wakes up. With this unique concept, Han Hyo-joo had to act with 21 actors who differ in gender, age, and looks. Baek Jong-yeol, the director of "Beauty Inside", said she is like a vending machine. "She instantly adjusts her acting style to match the different actors".

Go Ah-sung will be trying something new with the thriller "The Office". The actress had up to this point developed a strong teenage girl persona in her previous movies including her debut movie "The Host" and recent projects "Thread of Lies" and "Snowpiercer". In this movie, she is playing a character who has just started out in society as an adult and is going through a very tough learning process. Prior to its commercial release, the movie's artistic merit has been proven by being submitted to the Cannes film festival last May.

Go Ah-sung said "Confronting a challenge always makes my heart flutter". She is eager to change her image by being in "The Office" which tells the tale of a series of murders occurring in a company.

""Stars of August movies", Han Hyo-joo & Go Ah-sung.. going for unfamiliar but fresh"
by HanCinema is licensed under a Creative Commons Attribution-Share Alike 3.0 Unported License.
Based on a work from this source