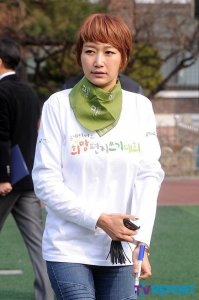 Model-turned-actress Byun Jung-soo is known for her chic sense of style, and fans can now check the star's latest trends by watching her new talk show "Olive Show" on cable channel Olive TV.

The 34-year-old host turned up at the press conference of the show dressed in black with gold accessories last week and showed her anticipation of hosting the program.

"I've even cut my hair for the show, which I have kept long for the past three years. I'm planning to show viewers various fashion styles", she said.

This is the first time Byeon has hosted her own show, and she mentioned that she was aiming for the Korean version of the U.S. hit television show "The Tyra Show" hosted by supermodel Tyra Banks. Unlike other trendy programs that air once a week with rebroadcasts everyday, the "Olive Show" will air Monday through Thursday with different themes.

"Mondays will carry entertainment news while Tuesday will be like a reality show with documentary-style clips. The clips will offer stories about real viewers and their careers, dreams and relationships. On Wednesdays, I will be interviewing prominent figures in the fashion, beauty and entertainment industry and look into their world of style. On Thursdays, there will be interviews with unique trendsetters. This week I met people who collect certain fashion items like shoes or bags. The show will introduce their unique fashion style and perspective", Byeon added.

"It may resemble many other programs, but Byeon will actively participate in the judging, so it will be a tough race with real competition", he said.

There are other programs that already offer the latest fashion trends and style tips: "Style Magazine" and "Life Magazine" on cable channels OnStyle and CH Donga respectively.

"Style Magazine" started in 2006 with actress Lee Seung-yeon, but is now hosted by actress Lee Hye-young. With in-depth interviews and trendy reports on the latest fashion icons, brands and styles, it has gained popularity since its first airing. Lee's clothes and accessories have also been under the spotlight and she is now considered one of the most trendy celebrities here, as well as being the CEO of her own fashion brand "Missing Dorothy".

The host even goes abroad to look for fashion tips overseas and forecasts the next season trends with prominent fashion designers and stylists.

The program airs every Saturday at 11 p.m. on OnStyle.

Miss Korea-turned-actress Son Tae-young hosts a program called "Life Magazine". This is not just about pretty bags and clothes, but medical treatments, exercise tips and other useful information. Sohn does not just sit in a studio and offer a list of trendy fashion items, instead she goes out and offers new trends in various areas, including interior design, food, and health.

The host recently surprised fans with her plans to tie the knot with fellow actor kwon Sang-woo, but CH Donga confirmed that the actress will continue to host the program for the time being.

"Life Magazine" airs every Friday at 7 p.m. on CH Donga.