Stars using stage names as singer, but real names while acting! Why? 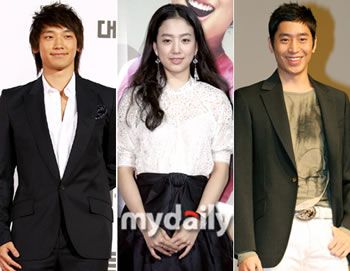 Nowadays, it is no longer rare to see a singer taking on acting as either their second career or a main career after ending their singing business. Far too many singers are driven to acting business as if it is their final destination in their careers in showbiz.

Of course, it is great way of increasing and lengthening their popularity and competitiveness in showbiz; and a strategy of "One source  multi-use" policy, which uses one resource in various fields to maximise the profit from it.

The common thing between these singers who have half or fully turned to acting business is that when they appear in musicals, films or dramas, they use their real names even though they had been using stage names while they were in music industry.

For example, Rain maintains his stage name, Rain when he releases his albums or singing on the stage; but when he comes out as an actor in dramas such "Sang Doo! Let's go to school" and "A Love to Kill" and a film "I'm a Cyborg, But That's OK", he uses his real name, Jung Ji-hoon.

Likewise, Shinhwa's Eric Mun is also using his real name, Moon Jung-hyuk, in his drama "Phoenix" and the film "Diary of June". The dance group, Chakra's member Ryeo-won is also using her real name, Jung Ryeo-won, for her acting career.

SES member, Bada uses her real name Choi Sung-hee in her musicals; while Shoo work with her real name Yoo Soo-young in the film industry.

In the past, there were quite a few who acted while keeping their singing career. And they maintained their stage names in both singing and acting careers. For example, Nam Jin used his stage name 'Nam Jin' in filming his movies.

However, why is the trend of stars using stage names while singing and returning to their real name in acting business, is being continually heightened? First of all, according to the explanations provided by those in showbiz, the singers think that their previous images as singers will become an obstacle in their acting business. Thus by using their real name, they are trying to create a new image to the public. Secondly, they change their name in order to escape from doubts of some viewers who think that they earned a main role for their popularity as singers and to avoid stereotypical views that those who have turned to acting business from singing lack acting skills.

Upon this trend, many critiques pointed out that these singers wouldn't be able to create a new image just because they have changed their names. But when they make a complete transformation into their characters base on confident acting skills, then they have made a successful turnaround as an actor.

"Stars using stage names as singer, but real names while acting! Why?"
by HanCinema is licensed under a Creative Commons Attribution-Share Alike 3.0 Unported License.
Based on a work from this source