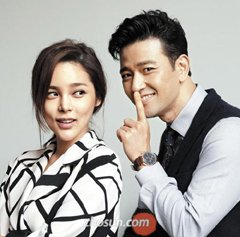 Park Si-yeon and Bae Soo-bin, the stars of the new weekend drama "Greatest Marriage" on TV Chosun, believe there is no such thing as a perfect marriage, but patience and compromise will pay off.

The first episode will be aired at 8:30 p.m. on Saturday.

Park plays a successful career woman who voluntarily becomes a single mom. She does not like the idea of getting married but wants to have a child. She breaks up with her boyfriend, who does not want the responsibility, and decides to raise the baby alone.

"In the past, it was socially unacceptable to be a single mother, but things are changing little by little", she says.

Park herself gave a birth to a baby girl in September last year and Bae had a son in June this year. It is their first project after becoming parents.

"I now have a deeper understanding of motherhood, childcare and my profession", she says.

For Bae, the comic role is a new departure. "I longed for this opportunity, and as soon as I read the script I wanted to do it", he said.

Park, who won over viewers as a femme fatale in her latest soap on KBS, makes the opposite choice this time. She chooses family over career and status.

"I was able to connect very well to the ups and downs that this character goes through", she says.

Last year, in the third year of her marriage, she was sentenced to two years' probation for illegal use of the tranquilizer Propofol.

"My husband is consistently calm, but I have big mood swings. Without his constant support, I don't think I would have been able to start working again", she says.

Park says she worked hard to get back into shape after childbirth and lost 22 kg in six months to get back in front of the cameras.

"Stars Wrestle with Tough Parental Choices in New Soap"
by HanCinema is licensed under a Creative Commons Attribution-Share Alike 3.0 Unported License.
Based on a work from this source