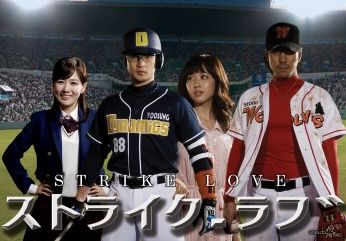 Korean baseball drama "Strike Love" may be set at scoring big in Japan with recent indicators revealing that it is winning the race against other popular Korean dramas aired in the country, according to the show's producer Green City Pictures Inc. on Thursday.

The sports drama, aired every Thursdays at 8 p.m. on Fuji TV's CS channel starting March 18, has been the most-searched Korean show for two consecutive weeks on Fuji TV's official website.

"Strike Love", which originally aired in Korea in May 2009, was scheduled for a 20- episode run but was cut short by four shows after suffering from low ratings.

Green City include deleted episodes as well as shooting extra scenes for the series being shown in Japan.

"Strike Love" can also be watched online an hour later after its airing every Thursday through some 150 websites distributed by the online distribution company GVIX.

"Strike Love" is based on a popular comic series by noted Korean artist Lee Hyeon-se. Korean actors Yoon Tae-young and Park Sung-min star as two baseball players who are in love with the same girl, played by actress Kim Min-jeong.

""Strike Love" eyeing homerun with Japanese audience"
by HanCinema is licensed under a Creative Commons Attribution-Share Alike 3.0 Unported License.
Based on a work from this source