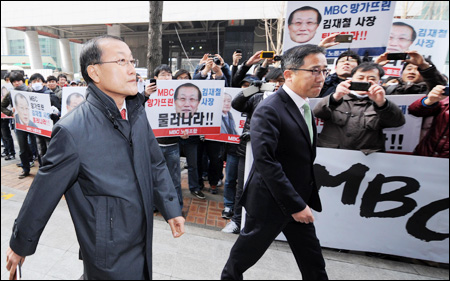 MBC president Kim Jae-chul, left, walks toward the headquarters of the Foundation for Broadcasting Culture in Yeouido, Wednesday, while striking MBC reporters boo him on the sidelines. The foundation is the largest shareholder and supervisor of the nation's second largest broadcaster. Nearly 200 MBC reporters and producers have been staging a walkout for more than a month, demanding Kim step down from his post. (Korea Times photo by Park Seo-kang)

The prolonged strike at MBC is disrupting not only news programs but also popular TV series. It announced Wednesday that its TV series "The Sun and the Moon" won't be aired for an indefinite period because its director Kim Do-hoon is participating in the strike.

Unionized workers of the country's second largest broadcaster are continuing their walkout since late January, demanding the resignation of the firm's President Kim Jae-chul.

The last two episodes of the drama, which has garnered above 40 percent ratings, were supposed to be aired on Wednesday and Thursday night.

"The drama will resume after Kim returns to work. However, we may find an alternative director to complete the series", an MBC spokesman said.

The director is joining the ongoing strike as the MBC union steps up pressure on the president. The union claims that he has damaged MBC's political neutrality by blocking critical reports on President Lee Myung-bak and his conservative administration since he took office in 2010. Kim has sacked union leaders and taken discriminative measures against striking unionists.

Besides MBC, the union of the public broadcaster KBS walked out on Tuesday, demanding management step down. Employees at YTN, a cable news channel, also decided to go on strike. Unionists of the firms argue that their "political" presidents have censored coverage critical of President Lee.

Opposition parties have called for the resignation of the presidents to normalize the operation of the broadcasters. "The ongoing strikes at KBS and MBC show that the principle of fair reporting and freedom of the press were severely damaged under the Lee administration", Kim Jin-pyo, floor leader of the main opposition Democratic United Party, told reporters Wednesday.