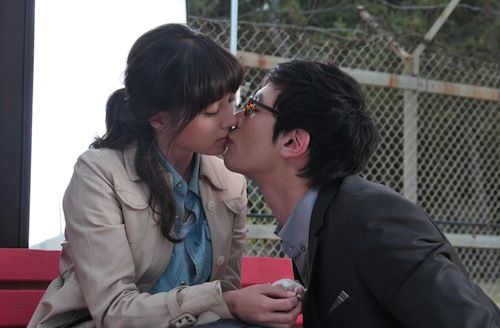 Chuseok is the time for migrating home en masse, or for film buffs, the perfect time to camp out in front of the big screen.

The cinema lineup this year was mostly marked by hardboiled action flicks and ruthless, skin-crawling thrillers. While Won Bin's bloody drama "The Man From Nowhere" continues to top the box office with more than 5.1 million viewers as of Sept. 5, a couple of romantic dramas will open Thursday for the mellow fall season.

Koreans have a soft spot for tragic melodrama, and even romantic comedies often cannot escape the traps of tragicomedies. On the post-"My Sassy Girl" Korean cinema scene the romantic comedy genre has repeatedly suffered from the problem of trying to substantiate silly slapstick with a dose of heartbreaking drama, ending up with something that dabbles in comedy and tragedy in a messy, bipolar fashion.

Kim Hyun-seok has contributed relatively solid stories about matters of the heart such as "When Romance Meets Destiny", and brings a breath of fresh air to the local batch of romantic comedies with his latest offering, "Cyrano Agency" (Lotte Entertainment). As much as it realizes an award-winning script the director penned 15 years ago, the film is seamlessly crafted and brims with hearty laughs and drama.

Before delving into the storyline, the film's title needs a little explanation. Some may be familiar with French playwright Edmond Rostand's "Cyrano de Bergerac", of which the silver screen adaptation starring Gerard Depardieu is well known. Cyrano is a romantic poet-army officer, who, embarrassed by his large nose, cannot confess his love for the beautiful Roxanne. When he learns that one of his cadets, the handsome Christian, is also wooing Roxanne, he ends up being the ghost writer for the younger man's love letters.

The film's namesake Cyrano Agency offers a similar cupid service for those Lost in Love in modern-day Seoul. The agency is actually comprised of members of a theater troupe, which, out of financial desperation, found a lucrative way to reap profits from the romantically hopeless.

And so, equipped with fine actors, director, costume designer and scriptwriter, as well as an array of C.I.A-worthy gadgets, the group conspires to line up the constellation and stage the picture-perfect scenario to entice an unsuspecting target.

Uhm Tae-woong stars as Byeong-hun, the mastermind of the clandestine business. His latest client is Sang-yong ("High Kick Through The Roof" star Choi Daniel making his big screen debut), a rich and handsome, highly eligible bachelor who is rather incompetent when it comes to love. Byeong-hun, however, is surprised to learn that Sang-yong's object of affection is none other than his ex-girlfriend Heui-jong (high-in-demand actress Lee Min-jung), a rather mysterious beauty with a knack for riding Vespas. It becomes rather difficult for Byeon-hun to maintain his cool business facade as he is forced to face old skeletons in his closet, while his fellow Cyrano agent Min-yeong (Park Shin-hye assumes a more grown up role) begins to suspect his past may hinder the business' 99.9-percent success rate.

Song Sae-byeok and Ryu Hyun-kyung, who co-starred in "The Servant", serve dashes of fine humor.

Another romantic drama on offer for Chuseok is "Grand Prix" (Sidus FNH). Yang Yoon-ho, who directed the blockbuster TV series "IRIS", teams up with its leading lady Kim Tae-hee for action on horseback.

Finally we have a heroine propelling the action sequences onscreen, and Kim is still really pretty, even when she's coated in sweat and horse dung while wearing white spandex that's, well, far from sexy.

Unfortunately that is all that must be said about the so-called sports drama. This doesn't mean to say it doesn't capture the charms, albeit superficial, of horseback riding, but it stops short of skimming the surface of a potentially rich drama and meaningful character development. Instead, it reverts to the cliched formulas of conventional local melodramas, which are never complete without complicated romantic histories involving parents that suggest a zero degree of separation among Koreans.

Kim plays the role of Jun-heui, an ambitious young woman set to make waves on the equestrian scene. One day she loses her beloved horse in an accident, and decides to quit the sport. She takes off on a trip for Jeju Island, where she meets U-seok (Yang Dong-geun), an equestrian champion experiencing a similar slump.

It's a classic girl-meets-boy _ or rather beauty-meets-the-beast _ tale in which the girl is transformed as both an individual and athlete in order to take that extra leap of faith. Kim, who is considered one of the most beautiful women in Korea, is strategically paired with Yang, the country's favorite oddball persona who has returned from a two-year military hiatus.

The odd coupling works somewhat in the beginning, with Yang, whose mere presence onscreen is enough to inspire laughter. The rest of the romance is served on horseback rides amid the pastoral, golden sunset-hued scenery of Jeju and larger-than-life proposals of love involving departing airplanes. But we've seen it all in TV dramas, and there seems to be little merit to watching it on the big screen unless you're looking for a lighthearted date movie.
____________________
"Cyrano Agency" will open Thursday in time for Chuseok. /Courtesy of Lotte Entertainment