Sung Min-woo of "Oh! My Lady" is not just a pretty boy

A look into Choi Si-won's character from TV series "Oh! My Lady" 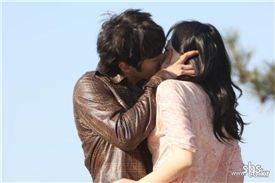 Sung Min-woo
His noticeable feature is his six-pack and his specialty is kissing. He stopped counting the number of girls he has gone out with after 30 and believes that all girls love him so if you merely glance at him he will say, "Bring a piece of paper, I'll give you my signature". He likes simple roles that extenuate his physical features and if he is told to practice he says, "I don't feel like it today" and if someone questions his acting skills he will get upset and impatiently state, "Let's not talk about the horrible acting". On the outside he claims that he likes the book "The Alchemist" by Paulo Coelho but he actually complains "Next time, pick an author with an easier name. Paulo Coelho, it's hard to pronounce". When he receives a scenario about Tae-jo, the first king of the Joseon Dynasty, Min-woo will throw facts he knows about the king that he knows from his shallow knowledge. But he is able to think fast on his feet when it comes to dealing with emergency situations such as covering up the burnt spot on his shirt by revealing his abs or kicking his manager out of the house that his hidden daughter is staying at by saying "I hate you because your feet smell". If he gets ignored by another person, he insists, "You need a human being with fundamentals? Didn't you say you needed a star? What if you had to choose one? It's hard to find both qualities in a single person because everyone does what the star wants". And when you try to encourage him and tell him not to worry about failure, he will pretend to be strong by saying, "Did I ever say I was scared of doing it?" but such bluffing is done in style.

"Sung Min-woo of "Oh! My Lady" is not just a pretty boy"
by HanCinema is licensed under a Creative Commons Attribution-Share Alike 3.0 Unported License.
Based on a work from this source