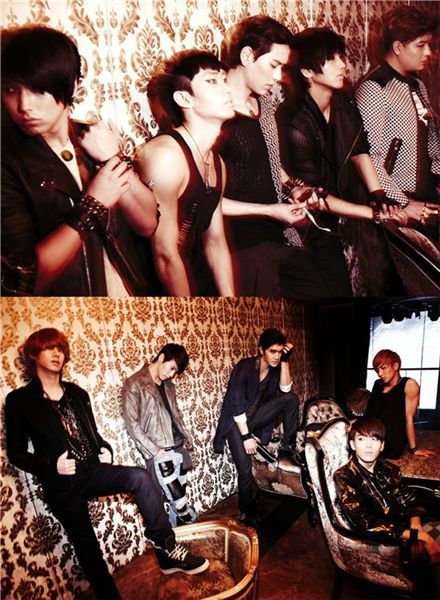 Korean idol group Super Junior will be releasing two different versions of their upcoming fourth album "BONAMANA", according to their agency SM Entertainment on Monday.

SM explained in a press release that there will be versions A and B for the new record, with the first going on sale on May 13 featuring the boys sporting a mod and funky style for the jacket cover and album booklet, and the latter released on May 20 containing behind-the-scenes photos from their stage performances and music video shoots.

Their album "BONAMANA" will feature a total of 11 songs including their title track of the same name which was released online today on the websites of various music providers.

The boys are scheduled to give their comeback performance on KBS music show "Music Bank" on May 14 with only ten-members of the band to promote this record.

Super Junior members Kangin plans on entering the army to fulfill his mandatory two-year military service, Kibum will be focusing on his acting career and Hangeng is currently embroiled in a legal battle with SM.

The thirteen-member boy group first made their debut in December 2005 with their first album titled "SuperJunior05 (TWINS)" and have released several other albums featuring their hits "Don't Don", "Sorry Sorry" and "Rokuko".

"Super Junior to release two versions of new album "
by HanCinema is licensed under a Creative Commons Attribution-Share Alike 3.0 Unported License.
Based on a work from this source