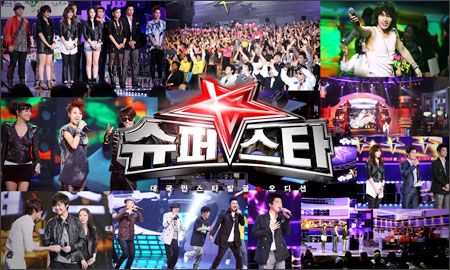 The popular Korean program "Super Star K" is reaching out to the United States. Mnet Media, the cable channel that airs the show, announced Wednesday that the program, which is in its second season, is casting its eyes on America.

"We have received requests for overseas auditions from people who wanted to try out and hopefully become the next winner of `Super Star K'. Considering that many singers who work in Korea have been chosen through auditions held abroad, we decided to hold one in Los Angeles as a start", Kim Yong-beom, the chief producer of the show, said.

People of any age who can sing Korean songs in Korean can apply for an audition, regardless of nationality. It will take place at 10 a.m. on June 26 at the L.A. CGV theater in Koreatown and anyone who wishes to show off their talents is welcome to show up. Qualifiers from the first round will move on to the next stage the next day on June 27, and the winners from the second heat will be flown to Korea in July for the final show with the Korean contestants.

"The whole crew has high expectations, as the event will be held in the United States, the home of pop music. We hope this will be a chance where we can find and further nourish aspiring artists living in L.A"., he added.

As Kim mentioned, numerous singers currently working in the music industry were discovered through competitive auditions held by top local agencies. 2NE1 member Sandara Park was discovered in the Philippines, while Jay Park, also known as Jay Park and former member of boy band 2PM, was also recruited after auditioning for JYP Entertainment.

More than 1.3 million people applied for the second season of the show, more than double last year's count.

The search for talent around the world seems to be a trend, with former American Idol host Simon Cowell looking into putting together a show called "World's Got Talent", according to Entertainment Weekly.

"Super Star K" may not be targeting the world just yet, but the first overseas audition proves the high demand for local shows and that many up and coming musicians are looking for a way to break onto the local music scene.

"Super Star K" started last year with hopes that the show would somehow revive the dying music industry and further discover hidden talent from around the nation. Top producers and singers, including Yang Hyun-suk, Lee Hyori and Lee Seung-chul, appeared as judges, and the eventual winner Seo In-guk became a star.