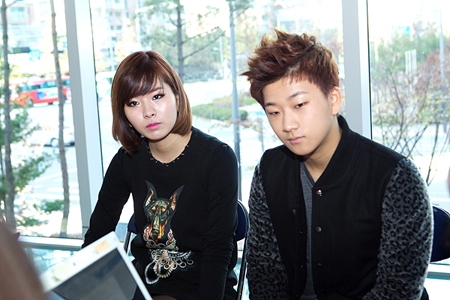 The winner of "Superstar K3" Ulala Session, and the third and fourth place winners, Christian Love Lee and the duo Two Month, looked tired but ready for their journey into professional music. But runner-up Busker Busker was absent at the interview held at Sangam-dong, Seoul, Monday. After winning one of the biggest audition programs in the country, the three will go on a six-month incubation system with CJ E&M and after which, a possible professional career.

Ulala Session members didn't looke like they got much sleep. Leader Im Yoon-taek, 32, who is in stage four stomach cancer, was

22 _ all quoted and referred to Lim in answering every question. Park Seung-il said "Lim persuaded us to audition for 'Superstar K3'. He wanted us to build a solid foundation to become singers when he can no longer perform with us". Kim said the group will spend the prize money to create a stress-free and pleasant environment for Lim as they had planned when they had entered the competition.

group does not have any specific details for The future albums yet and expressed empathy towards Busker Busker's decision to take time off. "We know what they went though, and they were having a really rough time during the final week".

Christina Love Lee 26, who was ranked fourth, was glowing with excitement. "I am not sorry at all that I did not win".
A former pianist, Lee turned to singing after she hurt her pinky in a volley ball match in 2007. Depressed and shocked that she could not play the piano anymore, she turned to singing and songwriting. She did release a CCM album in the United States "Since I Found You" with Malaco Records in 2008 but she was not well-received as an Asian singer promoted to perform African-American gospel music. Christina ended the contract and became a music-therapist and worked for New York University in healing people through her voice. She passed the auditioned for "Superstar K3" 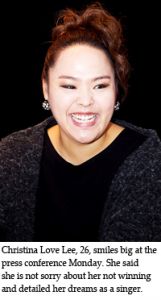 and "the Voice", an American reality talent show on NBS, but she chose Superstar K. "I am not an 'American' idol. I wanted to debut and perform here in Korea", Christina explained "When I debuted as a singer, I want to incorporate my experience as a therapist to touch people with my songs".

Christina said her dream is to play the piano in a duet with Alicia Keys. She also hopes to perform with the two judges of the competition Lee Seung-chul and Yoon Mi-rae, as well as a Korean CCM band, Heritage.

Lim Kim, 18, of the duo Two Months, already looked like a diva in an edgy black outfit and smoky eye make-up. Do Dae-hoon, 19, the other member, on the other hand seemed uneasy in stylish clothes. "Ye-rim asked me to play guitar for her in the 'Superstar K3' audition over a Facebook message and I am bad at saying no", said Do. According to Kim, Do was famous at school for his guitar skills. "I think having a partner and a guitar player widens the scope of my music greatly", said Kim.

Kim, who was a shy girl who'd never sing at a karaoke, began thinking about music when she moved to Canada as a junior high student where kids were more involved in extracurricular activities. Kim said she does not get nervous easily which explains her pro-like demeanor. A ravenous music lover, she constantly searches for music in many genres.

"Superstar K3 winners ready for new path"
by HanCinema is licensed under a Creative Commons Attribution-Share Alike 3.0 Unported License.
Based on a work from this source