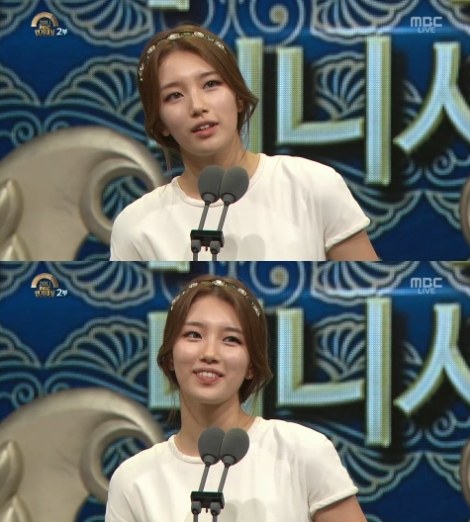 The 2013 MBC Drama Awards was held in the MBC Hall in Seoul on the 30th and Suzy won the Best Actress Award in the Mini Series Category.

Suzy said, "I am so grateful for this award and I want to say thank you to those who worked so hard during the drama; writer Kang Eun-kyeong, producer Sin Woo-cheol, all the staff and action teams. I will work harder. Thank you JYP and my family".

Suzy took on the role of Dam Yeo-wool, a character who loves the half-man half-beast character played by Lee Seung-gi. She also starred in the movie "Architecture 101" and dramas "Big" and "Dream High 2".

MBC "Gu Family Book" was broadcasted from the 8th of April to the 25th of June. It's a fantasy action drama about a half-man half-beast Choi Kang-chi (Lee Seung-gi) who was born between a god and a human struggling to live as a human and protecting his love with Dam Yeo-wool. It recorded the highest percentage out of the other dramas such as KBS 2TV "The Queen of Office", "Shark" and SBS drama "Jang Ok-jeong" in the same time frame and ended in high popularity.

Meanwhile, the MBC Drama Award is a festival for those actors and actresses who have shown outstanding performances during the year. The 2013 MBC Drama Awards was hosted by Lee Seung-gi and Han Ji-hye from "Gold, Appear!".

"Suzy almost cries saying her speech"
by HanCinema is licensed under a Creative Commons Attribution-Share Alike 3.0 Unported License.
Based on a work from this source