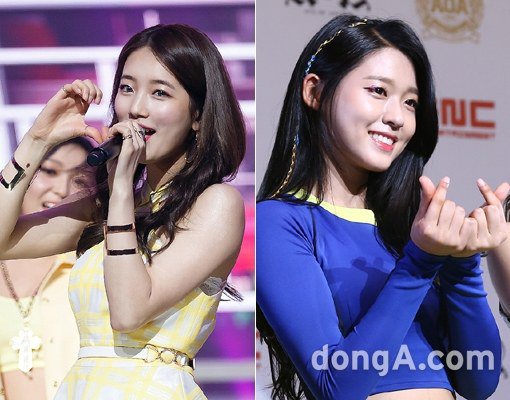 While AOA's Seolhyun is being looked at as one of the hottest girl these days, a rivalry has formed between her and Miss A's Suzy. Seolhyun is expanding her territory as an actress while Suzy seems to be stuck where she is.

Their competitive composition can be clearly seen in the advertisement industry. While Suzy has been the top model in her 20s for most ads until now, Seolhyun has grown so quickly and is taking over.

Suzy is currently modeling for cosmetics, chicken and 6 other different brands. On the other hand, Seolhyun is modeling for telecommunications and 3 other different brands. However, her group AOA is appearing everywhere with ads for sneakers, computer games and other brands. This results in Seolhyun and Suzy coming in 8th of commercial rankings. Seolhyun was known as the 'next Suzy' but now she's a fair rival.

The two of them are alike in many ways. Suzy and Seolhyun were born in October 1994 and January 1995, respectively. They have elegant and oriental images and are both part of popular idol groups.

Suzy is wider in range as she has supporters in every age group. However, all she has is the 'first love' image that she got from the 2012 movie "Architecture 101" and is currently on standstill. She starred in the 2013 drama "Gu Family Book". However, she's still the 'first love' icon and that's it.

On the other hand, Seolhyun is a rising new face. Her innocent looks but curvy body is a plus alpha. Since AOA's comeback in June, they have been wanted from various brands for drinks, bakeries, pizzas, chicken, jewelry and more.

Suzy is coming back later this year with the movie "The Sound of a Flower" and Seolhyun is currently starring in the KBS 2TV drama "Orange Marmalade" since her featuring in the movie "Gangnam Blues".

"Suzy VS Seolhyun, two top 20s actresses compete"
by HanCinema is licensed under a Creative Commons Attribution-Share Alike 3.0 Unported License.
Based on a work from this source