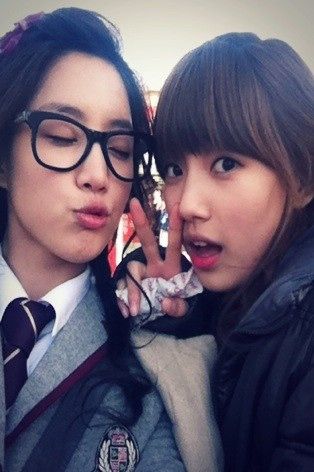 Korean female idol group T-ara member Ham Eun-jung has posted a picture of herself and miss A's Suzy on the set of their new drama "Dream High".

On Tuesday, Ham Eun-jung uploaded a photo on her official Twitter page (http://twitter.com/taraeunjung1212) of herself with her eyes closed and lips sticking out while Suzy is making a V-sign with her hand with a comment below saying, "I thank everyone who watched 'Dream High! ♥"

Fans who have seen the picture left responses such as "Aww you two are so cute! I like your hairstyle", "I watched the first episode and I can't wait to see more" and "'Dream High Fighting! Ham Eun-jung Fighting!"

In early November, both Ham Eun-jung and Suzy were cast as the female leads in KBS' musical mini-series "Dream High", in which they play Yoon Baek-hee and Ko Hae-mi, respectively, who are rivals at Kirin Art School.

"Dream High", which began its run on Monday, is a co-production between Korea's top entertainment firms KEYEAST and JYP Entertainment which also stars Korean actor Kim Soo-hyun and 2PM members Ok Taecyeon and Wooyoung about students who dream of growing up to become stars.

"T-ara Eunjung posts a picture with "Dream High" co-star Suzy"
by HanCinema is licensed under a Creative Commons Attribution-Share Alike 3.0 Unported License.
Based on a work from this source