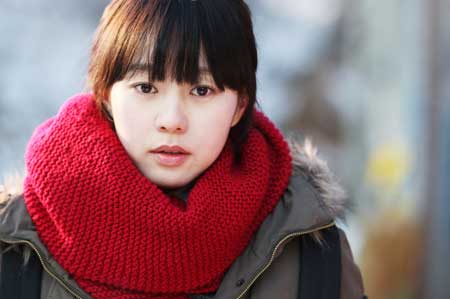 Yoo Da-in appears in scene from "Re-encounter", which follows the story of a young woman searching for her daughter, thought to be adopted. / Courtesy of Indiestory

A scorned lover, a dementia-stricken widow and even a sickly stray dog meander through memories and abandoned houses. In "Re-encounter", these dusty, depressing subjects, paired with uncomfortable issues like teenage pregnancy, adoption and animal rights, all somehow melt into a beautiful, poetically sparse mise-en-scene.

The film, which featured in last year's Pusan (Busan) International Film Festival, embodies the hallmarks of independent cinema by showcasing the art of simplicity: It's about the magic and curse of first loves, but like the best poetry, burns off any hint of sentimentality to instill, quite ironically, a heart-stopping and haunting effect, while not neglecting to provide wonderful wit, humor and even suspenseful twists.

Actress Yoo Da-in is compelling in her first lead role as the precocious teenager Hye-hwa. When Hye-hwa realizes that she is pregnant, the assertive young woman seems to have everything under control. But her convictions come crashing down when her loving, docile boyfriend Han-soo (played by endearing newcomer Yoo Yeon-seok) disappears without a word, apparently having been exiled to Canada by his mother.

Five years down the road, Hye-hwa's spunky attitude and fondness for colorful manicures have been replaced by a fixation with rescuing abandoned dogs when she's not grooming the creatures for a living. Mothering her widowed boss' son provides some relief for our lonely protagonist, who is wise and weathered far beyond her 23 years. The fragile equilibrium maintained by her routine lifestyle breaks, however, after an unwarranted reencounter with Han-soo.

At first Hye-hwa refuses her ex's approach, but her heart drops when he informs her that their child is actually well and alive - contrary to her understanding, that the baby girl had died hours after birth. Han-soo explains that their daughter had been given up for adoption by her own grandmothers.

The film raises awareness about the increasing number of teenage pregnancies and the fallibilities in adoption policies where children can be given up without the consent of both parents. Both are taboo topics here. But the film is not so much about the reconciliation process between an adopted child and birth family, like Tammy Chu's documentary "Resilience". It is essentially a Proustian journey of lost time, involving introspection and the possibility of second chances.

Writer-director Min Yong-keun proves to be an astute student of human psychology and responses, and moreover, a master of translating them into a strikingly simple audiovisual language. The delicate narrative architecture is complete with finely wrought details, crowned by melodramatic piano tunes that refrain from manipulating responses.

In theaters Feb. 17 and distributed by Indiestory.