Take off for Song Joong-ki and Yoo Seung-ho or solidification for Kim Soo-hyun and Lee Min-ho? 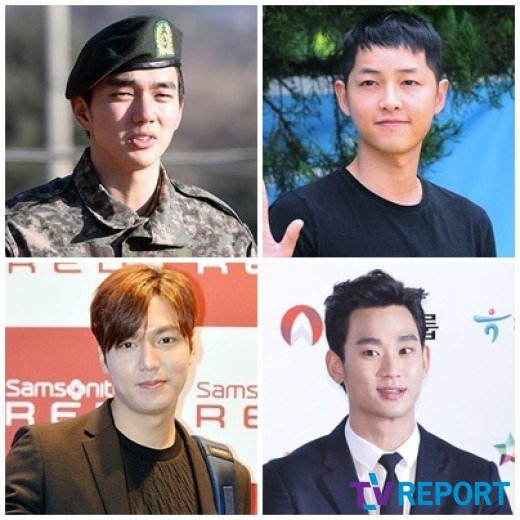 Actors like Choi Jin-hyuk and other top stars are joining National Service this coming 31st. Several 1986 born stars are being admitted. It's so bad that there's word saying there are no more actors to cast in dramas. However, they come as they go. Who's going to continue on with the dramas?

◆ Yoo Seung-ho and Song Joong-ki, we are back

Yoo Seung-ho chose the movie "The Joseon Magician" as his first comeback. He showed determination but said he knows he's got more responsibilities than he did 2 years ago.

We hope to see him quickly in a drama too. He left quite an impression in the 2012 MBC drama "Missing You".

Song Joong-ki had continuous homeruns with "Nice Guy" and "A Werewolf Boy" before he joined the military in 2012. He's currently still on duty.

Although he's due to be released, he's getting offers from all over the place. What will his discharge bring along with him on May 26?

There are speculations that he's chosen "Descendants of the Sun". However, his agency claimed there have been reports made based on no facts.

◆ Lee Min-ho and Kim Soo-hyun, not yet

Lee Min-ho, a Chinese region star, currently made a big hit with the movie "Gangnam Blues" which recorded a number of 2 million audiences. While he's busy traveling overseas for work, he's also trying to decide what to do before he joins National Duty.

Kim Soo-hyun is starring in the KBS 2TV drama "Producers" and another Hallyu wave is expected. He was chosen as the most liked actor by Koreans. He's also claimed that "Producers" won't be his final work and that he might do more work before going off on duty.

It looks like Kim Woo-bin is determined to become the best. After seeing him in "Friends 2" and "Twenty", he's coming back soon with another drama.

Lee Jong-suk is currently taking a break. He has made continuous hits with "School 2013", "I Hear Your Voice", "Doctor Stranger", "Pinocchio" and more.

Ji Chang-wook is also planning to serve duty next year. He is currently choosing his next big thing.

"Take off for Song Joong-ki and Yoo Seung-ho or solidification for Kim Soo-hyun and Lee Min-ho?"
by HanCinema is licensed under a Creative Commons Attribution-Share Alike 3.0 Unported License.
Based on a work from this source