Tang Wei Visits Korea While Hyun Bin's Out Of Military 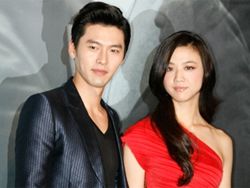 The Taiwanese star was here for a screening event of the movie her and Hyun Bin starred in, "Goodbye Late Autumn", on April 24th, at Mapo-gu of Seoul.

Fans and netizens are refusing to believe that Tang Wei's unannounced visit being made just in time to catch Hyun Bin on his break from the marine corps duties which started on the 23rd. Comments ranging from "It's just a coincidence" and "There's no need to read into this too deeply" to "It's too much of a coincidence for there to be nothing going on" and "It's a little suspicious that a star as big as Tang Wei would visit Korea without any hype" were made.

The two stars met on the set of "Late Autumn - 2010" which was when the rumors of them dating started.