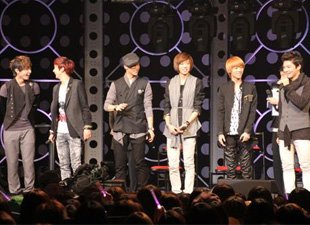 TEEN TOP knows how to make some noise. Literally.

According to reports, the group's February 9th concert at the Le Trianon Theatre in Paris broke the record for reaching the highest level in decibels at that particular concert venue.

The concert team confirmed that the vibrations caused by the audience jumping up and down to TEEN TOP's music caused the staff to have to hold on tight to their equipment. Also, because of the crowding at this standing concert, one person was even injured in the beginning of the show and had to be hospitalised.

Another concert organizer, this time for the group's show in Spain on February 10th, also added that the sound of the crowd at TEEN TOP's performance was louder than that of any heavy metal concert!

TEEN TOP held a tour in Europe, with other shows in Munich, Dortmund, London, Paris, and Barcelona. The idol group is also planning on releasing their first album on February 25th KBT with the pre-release song "I Wanna Love" to be dropped on the 15th.

"Teen Top's Concert Breaks Decibel Record"
by HanCinema is licensed under a Creative Commons Attribution-Share Alike 3.0 Unported License.
Based on a work from this source