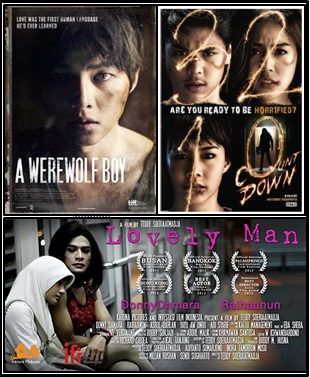 The fifth edition of TFEFF13 has now come to a close and organisers announce the winners of each section, as voted for by the audience:
• Current Asian Cinema Audience Award: "A Werewolf Boy"
The South Korean fantasy romance by Jo Sung-hee was a box office smash in South Korea, and overwhelmed TFEFF audience members awarded this tear-jerker the highest rating.
• The Terror Cotta Audience Award:  COUNTDOWN
Audience award goes to Thai pulp movie by debut director Nattawut Poonpiriya. This all-nighter event is co-presented in association with Film4 Frightfest.
• 'SPOTLIGHT ON: Indonesia' Audience Award: LOVELY MAN
Teddy Soeriaatmadja's LOVELY MAN is the story of a transvestite father re-united with his daughter contrasting modern progressives and traditionalists values. The newly added section for TFEFF13 was praised by audiences and critics for the selection and presentation of Indonesian cinema, an area not often showcased with such high profile in the UK.
The TFEFF Audience Awards are voted for by cinema-goers attending screenings at the festival. The festival organisers would like to thank the audience for their continuing support of the festival and for their positive comments on social network sites.
It was encouraging for the festival organisers to see that audience members came not only from all over the UK to attend the festival, but also from other European countries such as France, Germany, Poland and Ireland.
Terracotta Festival organisers would like to thank sponsors and supporting partners: Hong Kong Economic and Trade Office, London, Cathay Pacific, KLM, Embassy of the Republic of Indonesia. Festival organisers would also like to thank the special guests who attended the festival: Gilitte Leung (dir. LOVE ME NOT), Ryoo Seung-wan (dir. "The Berlin File"), Ifa Isfansyah (dir. THE DANCER), Edwin (dir. POSTCARDS FROM THE ZOO).
The fifth edition of Terracotta Festival was larger than previous years in terms of marketing effort, number of films, audience attendance, which reflects both the quality of output from Asia as well as the proven and growing demand for Asian Cinema in the UK. This is encouraging for festival organisers who will now begin work on the sixth edition.
#
For press enquiries: Claire Marty, Press Officer, tel: +44 (0) 779284 5887, email: claire@terracottadistribution.com
Images for TERRACOTTA FESTIVAL available at: http://terracottafestival.imgur.com/
"A Werewolf Boy"
Director: Jo Sung-hee. Cast: Song Joong-ki, Park Bo-young, Yoo Yeon-seok
South Korea/ UK Premiere/ 2012/ Korean with English subtitles/ 125 mins
Fantasy romance along the lines of EDWARD SCISSORHANDS, taking a traditional fairytale structure and setting it against a 1960's technicolor Korea.
"A Werewolf Boy" sales by CJ E&M
Countdown
Director: Nattawut POONPIRIYA. Cast: Pachara CHIRATHIVAT, Jarinporn JOONKIAT, Pattarasaya KRUESUWANSIRI
Thailand/ UK Premiere/ 2012/ Thai and English with English Subtitles/ 90 mins
New Year's Eve in New York City goes wrong for three flat-mates when their drug dealer overstays his welcome and turns psycho on them.
COUNTDOWN sales by GMM TAI HUB
Lovely Man
Director: Teddy Soeriaatmadja. Cast: Donny Damara, Raihaanun, Yayu aw Unru, Luddy Saputro
Indonesia/ UK Premiere/ 2011/ Indonesian with English subtitles/ 76min
A 19 year old Muslim raised girl looks for her long lost father who left her when she was four. From a small village, she goes to Jakarta to search for her father and find out that he is now a transvestite sex worker.
LOVELY MAN sales by Karuna Pictures

"Terracotta Festival Announces Audience Award Winner 2013"
by HanCinema is licensed under a Creative Commons Attribution-Share Alike 3.0 Unported License.
Based on a work from this source