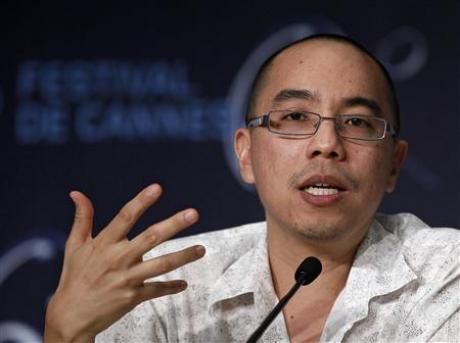 Thai filmmaker Apichatpong Weerasethakul at a news conference for the film "Uncle Boonmee Who Can Recall His Past Lives" at the 63rd Cannes Film Festival on May 21, 2010. [Credit: Reuters/Yves Herman]

Thai filmmaker Apichatpong Weerasethakul, whose film "Uncle Boonmee Who Can Recall His Past Lives" won the Palme d'Or at the 63rd Cannes Film Festival over the weekend, will be visiting Korea in August.

The internationally acclaimed director will be coming to Seoul to take part in the 4th Cinema Digital Seoul Film Festival (CinDi), as part of the Red Chameleon Jury which is composed of five world-renowned directors who have experience in digital filmmaking.

He will be judging digital features submitted by new Asian filmmakers in the competition category.

"Director Apichatpong is currently one of the world's top filmmakers who has taken film aesthetics to a new level", explained Mr. Jung Sung-il, program director for CinDi on why they invited him to the event.

Although he majored in architecture in Thailand, Apichatpong later studied filmmaking in Chicago and premiered his first full-length feature "Mysterious Object at Noon" in 2002.

The independent documentary pic was screened and awarded at numerous film festivals around the world including Rotterdam, Vancouver, London, Singapore, Hong Kong and Jeonju.

He has racked up many notable awards with his subsequent films over the years; he scored his first win at Cannes in 2002 with "Blissfully Yours", claiming the top prize in the "Un Certain Regard" section, and won the Jury Prize with "Tropical Malady" two years later.

The 4th Cinema Digital Seoul Film Festival (CinDi) will be held at Seoul's Apkujung CGV theaters from August 18 to August 24.