The 10th Green Film Festival in Seoul: Exploring the environment through films! 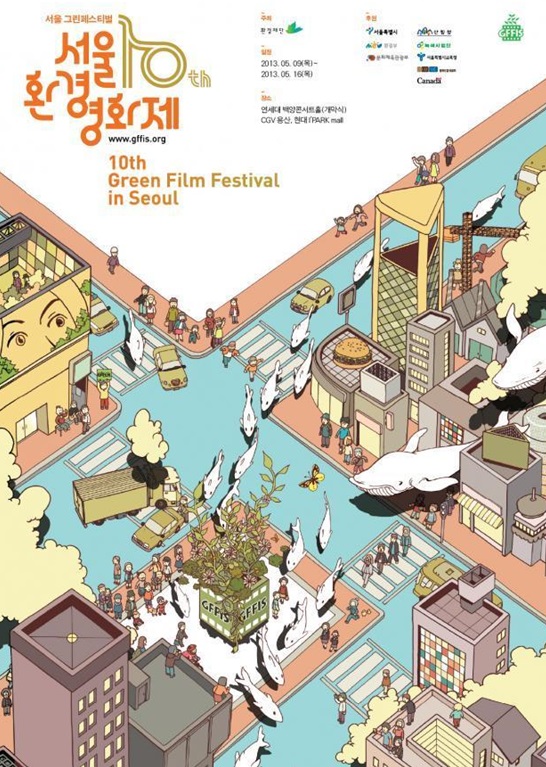 The Green Film Festival in Seoul (GFFIS) is a festival that provides us a place to think about the coexistence of humans and nature through film. Founded in 2004, the GFFIS is an international film festival, held annually, that has discovered and introduced about 100 outstanding environmental films from all over the world.

The 10th Green Film Festival in Seoul began in May 2013. With 21 submissions that qualified for the main contest, a total of 146 films from 46 countries were shown in various categories under different themes, such as "Climate Change & Future", "Green Panorama", "Korean Eco-Panorama", "Children of the Earth", and "Animal, Our Sweet & While Companion".

This festival was hosted by Korea Green Foundation and was sponsored by Ministry of Environment, Seoul Special City, Seoul Metropolitan Office of Education, Embassy of Canada to Korea and Korean Film Council.

For the past ten years, the GFFIS has thought of and tried various ways to discuss environmental issues through film as a way to more easily reach the public.

In particular, at the 10th GFFIS, we offered an environmental education program where people were able to participate in and enjoy practical activities regarding environmental awareness.

The festival featured programs, such as Cinema Greenteen to educate children and the teens about the importance and value of the environment, and Events for Our Sustainable Earth, to actively communicate with the public. Along with film screenings, we invited experts from various backgrounds to speak with the audience. Moreover, civic groups working on the frontlines to solve environmental issues came to talk about the complex and vivid field in which they work.

We will now introduce some award-winning films from the 10th GFFIS.

The Tonle Sap River in Cambodia changes its course twice a year. Through that process, the river continues its cycle of death, resurrection, creation, and destruction. The film deals with the difficult lives of three youths who have to choose between becoming laborers in the city or remaining at the village and suffering from deforestation, over-fishing, and debt as a result of rapid industrialization. This film is an outstanding piece of work that captured the beauty and mystery of communities around Cambodia's Tonle Sap River that are fearfully facing an uncertain future.

For 17 years, Sungmisan, a small mountain enclosed within a village, has shared its fate with the village residents who have always lived together and led a simple life. But in 2010, a private school foundation announced a plan to develop the mountain which has always been at the center of village life. This plan shook the very roots of the community. In the moment of crisis, when development is about to bring about the destruction of a community, the residents quickly respond to the threat and protect Sungmisan. While the fight to protect the village is grueling at times, the villagers do not lose hope or their happiness.

Amidst the wave of modernization and development in 1973, Paldang Dam was built. Land owners whose properties were submerged under water were given the new riverbeds to farm. Here, farmers started organic farming. Young farmers who left the city to join the back-to-earth movement all gathered in this land called Dumulmeori. This documentary examines the meaning of land, the importance of farming and features the people who fight to protect the land.

On a country road, a car pulls over then drives off leaving a dog behind. Left alone, the dog waits and waits for the family that has abandoned him. In fact, there are growing numbers of people having pets and animal neglects in the world. This film reflects a story of abandoned dogs and tells how they feel towards human.

The Future of Coexistence Imagined in Films

We are living in a time of environmental destruction caused by industrial development and climate change. The films shown at the GFFIS imagine a future in which humans and nature can peacefully coexist and considers alternatives and actions we can take to make that future a reality.

If you register on the website "Forest and I", operated by the GFFIS, you can watch a few selected films that were shown at the previous festivals.