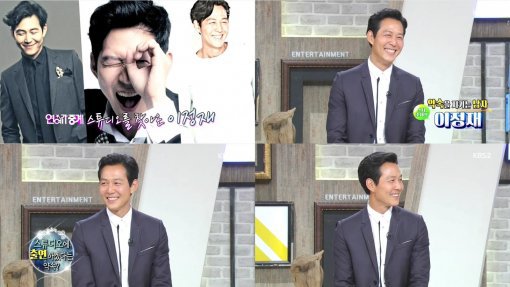 C-Jess Entertainment announced that Lee Jung-jae made a surprise visit to the "Celebrity News" studio on the 8th to keep his promise to the viewers that he'd make an appearance if the movie was successful.

The MCs of the show all chanted Lee Jung-jae's name and Sin Hyeon-joon said, "I've been in this show for 6 years and this is the hottest I've seen it been". Lee Jung-jae said, "It's exciting to see you all at the studio when we always meet outside. He talked about his future plans, the way he keeps fit and his hobby of going around looking for famous eats.

The last time a celebrity visited the studio was in 2014 when Kang Won-rae and Kim Song visited. Lee Jung-jae is the first celebrity to have made a promise to appear on the show. He had promised that he'd appear at the studio and give out free hugs to the public if the movie hit 8.15 million.

Since "The Assassination" hit over 8 million recently, Lee Jung-jae gave out free hugs on the 7th and even visited the studio. The fact that he kept his promise despite his busy schedule is bonus points for his fans.

Meanwhile, "The Assassination" is currently on a roll ever since its release on the 22nd of July.

""The Assassination" Lee Jung-jae visits "Celebrity News" studio"
by HanCinema is licensed under a Creative Commons Attribution-Share Alike 3.0 Unported License.
Based on a work from this source