The author of 'Hello Schoolgirl', Kang Full, works as a cameo for the first time 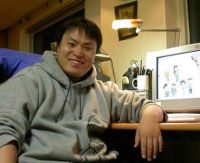 The author of a movie 'Hello Schoolgirl' (produced by Lets Film and joint produced by MNFC, Cheongeoram/ Director: Ryu Jang-ha), Kang Full, has been on the movie as a cameo. In the original story, he has been appeared as an unmarried man in the story but it is the first time for him acting in a movie.

He has been acted due to the proposal of Producer Ryu Jang-ha. He had been refused the proposal but he finally acted as a manager of an umbrella shop who helps four characters to be met. His character is awkward. He has very short speeches but has gotten few NG signs. But he finally finished his acting very well. "Acting is very difficult for me. Creating animations are much easier for me" said, Kang Full.

The original story of the movie 'Hello Schoolgirl' had been serialized through the Internet with great record by 60,000,000 of total views of pages, the average pages of 2,000,000 per day, and 500,000 of readers responses in the forum. The story is about two men and two women who have no tactics, experience, brave, and plan for love. Those factors make this story more unique. Based on the original story, it will meet audiences with four famous actors, Yoo Ji-tae, Lee Yeon-hee, Chae Jung-an, and Kangin on 27th.

"The author of 'Hello Schoolgirl', Kang Full, works as a cameo for the first time"
by HanCinema is licensed under a Creative Commons Attribution-Share Alike 3.0 Unported License.
Based on a work from this source