Webtoons to TV shows, TV shows to films and films to novels; the element of multi-use, meaning using and selling one round of content into various genres, has become the basic strategy of the cultural industry. Because it utilizes content that has already been 'acknowledged' once, some degree of box office success is guaranteed.

However, there are exceptions. It's the cinematizing of dramas. Even the most popular drama can become a disaster when turned into a movie. Some examples are "Hwang Jin Yi", "The Last Blossom" and "Cheese in the Trap - Movie". However, there is something that broke this formula, and that is "The Bad Guys: Reign of Chaos".

This movie that was released on the 11th is the story of bad guys who gather to catch even worse guys when a prison vehicle is attacked and the prisoners escape. It is based on the 2014 OCN drama "Bad Guys".

"The Bad Guys: Reign of Chaos" was not highly anticipated before its release. The media and critics reacted harshly and some loved it, while some didn't. It started in 2nd place at the box office on its first day of release, because of its competition, "Tazza: One Eyed Jack". However, things took a turn overnight and "The Bad Guys: Reign of Chaos" reached its breaking point in just 5 days, and had a record of 3 million viewers in a week.

There are several reasons why "The Bad Guys: Reign of Chaos" could be introduced as a film, and one of the biggest reasons is that the original contents were accurately identified and utilized in the genre of film and the atmosphere of the present time.

"The key is how to remake content thoroughly well. A film should be like a film. "The Bad Guys: Reign of Chaos" made sure of that. It was also very financial. It showed that it understood the main characters and the layout of the drama. It didn't need to explain everything once again and just flowed into the story. It didn't even try to force messages into the film. It managed to figure out just exactly what the audience wanted and that's what aided in the success of the film", said culture critic Jung Deok-hyun. 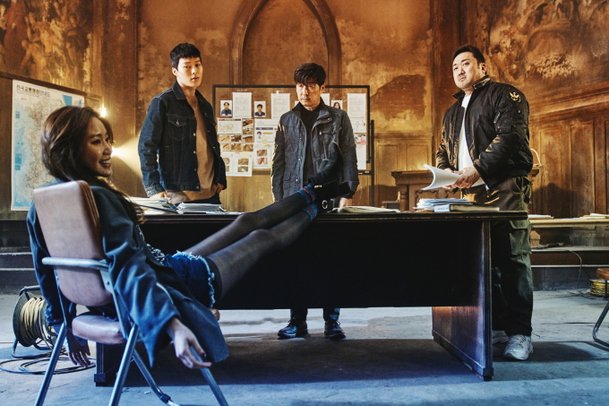 Adding just enough change from the original drama also brought about positive results. It maintained the original characters Park Woong-cheol (Ma Dong-seok) and Oh Goo-tak (Kim Sang-joong), but added new characters like Kwak No-soon (Kim Ah-joong) and Go Yoo-seong (Jang Ki-yong). It brought the original layout of the drama into the movie, but at the same time added new resources to it and satisfied fans from the original.

There are also reviews that the film had luck. Competing films "Tazza: One Eyed Jack" and "Cheer Up, Mr. Lee" didn't do so well at the box office.

CGV sources say, "Unlike the other two, which were adult-rated and 12 years and above, "The Bad Guys: Reign of Chaos" had an age limit of 15 years. It was suitable for families, and grown-ups who watched the drama could also enjoy the film".

""The Bad Guys: Reign of Chaos" Breaks Drama-to-Film Adaptation Stereotypes"
by HanCinema is licensed under a Creative Commons Attribution-Share Alike 3.0 Unported License.
Based on a work from this source