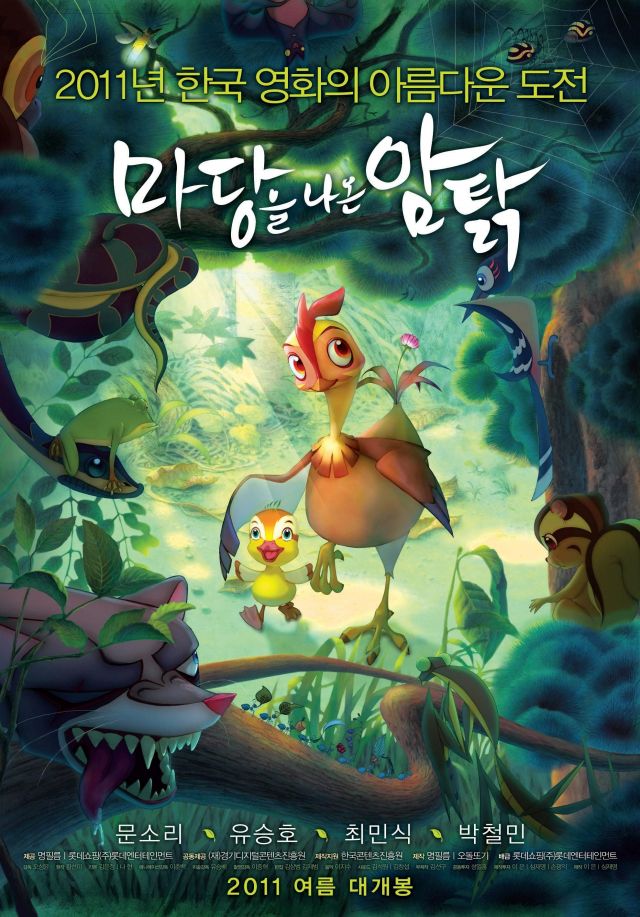 In your opinion, what was the most memorable Korean content of 2011

Korean content spent the year rapidly spreading through the world, in the form of K-pop, TV dramas, movies, and animated characters. 2011 was a year of Hallyu.

[Interview : Shim Jae-myeong, Winner of the Presidential Prize for Animation] "I would like to share this honor with everyone who worked on "Leafie, A Hen Into The Wild". Thank you".

[Interview : Joo Ho-min, Winner of the Presidential Prize for Cartoon] "I will repay this honor with even better cartoons in the future. Thank you".

The Future Generation Presidential Award was newly created for the 2011 awards ceremony. The award went to the world's first 4D theme park.

[Interview : Choi Eun-seok, CEO Live Park d'strict] "People usually think of movies when we talk about 3D. 4D is 3D with a touch of direct experience. The 4D art here combines the aspects of games, performances, exhibitions, and art".

The theme park is a bold challenge to the global entertainment industry! After 2 years of preparations and US$13 million, the first 4D theme park opened right here in Korea to enthusiastic response.

[Interview : Choi A-ra, Visitor] "It's like I'm in a virtual reality".

[Interview : Jang Se-hwa, Visitor] "It looks like things are really coming out of the screen. The kids run around trying to grab them. It was so much fun, and really fascinating".

There was another project in Korea that wrote history this year - the animated movie "Leafie, A Hen Into The Wild". The movie represents great achievements for the cultural industry.

[Interview : Shim Jae-myeong, Winner of the Presidential Award in Animation] "I felt that Korea needed to create a high-quality animation movie like those from Hollywood or Japan".

Online games were popular in 2011, and played an important role in solidifying Korea's place as an online game hub of the world.

This year, much attention was also given to cartoons, which were reborn as movies and TV dramas. The competition in this category was fierce.

[Interview : Lee In-suk, Director Korea Creative Content Agency] "The content industry is important first because it is a core service industry, which fosters growth in other industries as well. It will drive future growth. Second, growth in content creates more jobs than most other industries. Content development is a solution to our low employment rates".

The Broadcast Film Grand Prize category had the most winners this year at the Korea Content Awards, with 13 projects chosen based on their quality, originality and social impact.

[Interview : Jack of all trades]

Of the 13 projects, the one that had the whole nation talking until the very last episode was the TV drama "Secret Garden". The show turned out to be an amazing success. From the soundtrack to items that the stars wore on set, every aspect of the drama led to new trends and new sales opportunities, and ultimately to export contracts. All in all, it was a home run.

[Interview : Lee In-suk, Director Korea Creative Content Agency] "As of 2010, sales in the Korean content market was about US$62 billion, which ranks it about ninth in the world. Of that, $3.1 billion was made up of exports, 18% higher than the year before. The new Hallyu wave centering on K-pop as well as exports of games, TV dramas, and characters allowed the Korean content industry to show a 30% on-year growth in the first half of 2011".

But TV dramas aren't the only genre that can spawn sales in different ways. Characters are also projects with infinite opportunities.

These are the characters that dominated the character market this year. They are dogs and cats that look like aluminum cans. They go by the name of "Cannimals".

These are the brains behind the Presidential Award-winning Cannimals. Cannimals received a warm reception abroad for their attempt at 3D drawing, unusual for TV animation. The idea for cannimals first came from CEO Kim Yu-gyeong.

[Interview : Kim Yu-gyeong, Winner of the Presidential Award for Animation] "While we were discussing how to create our own unique characters, we were eating cup noodles and canned tuna. All of a sudden, we were inspired by the tuna cans, and decided to call our characters "Cannimals". It all happened at once".

The Cannimals will be marketed through print materials, mobile applications, stationery, and theme parks, demonstrating the power of the character industry.

[Interview : Kim Yu-gyeong, Winner of the Presidential Award for Animation] "Late next year, children in 160 countries all over the world will be able to meet Cannimals through their TVs. We will work hard to establish the Cannimals as a global brand in 2012".

We sped through the top Korean content of 2011. What did you think