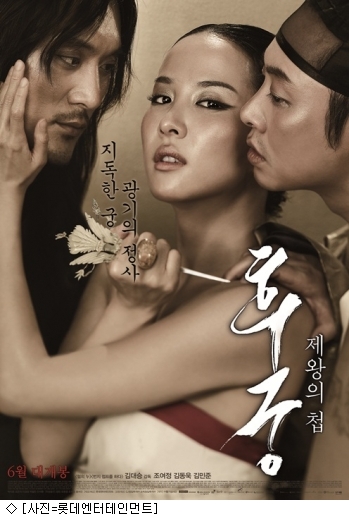 With just one day to go, "The Emperor's Concubine" showed signs of success by becoming the most booked movie.

According to the Korean Films Commission on the 5th, "The Emperor's Concubine" showed a 19.9% of advance sales in tickets. Expectations in this movie is really high as this is director Kim Dae-seung's first piece of work in 6 years and the cast are about to go through a major change in acting.

The first and second place of the box office is occupied by "Everything about my Wife" and "Men In Black 3". After "Men In Black 3" was released on the 24th of May, the two movies struggled for first place. It is a wonder if "The Emperor's Concubine" can overcome the condition of being adult rated and succeed.

"The Emperor's Concubine" is about the love and lust happening inside a palace where no one can live in without becoming crazy. Hwa-yeon (Cho Yeo-jeong) becomes the concubine for love, General Seong-won (Kim Dong-wook) can't help his feelings for her and Kwon Yoo (Kim Min-joon) loses everything in the name of love.

Other than the three main casts there are, Park Chul-min, Lee Kyung-young, Park Ji-young, Jo Eun-ji and others. The movie has been reviewed well for it refined imagery and the excellent performance of the supporting acts before the official release which is on the 6th.

""The Emperor's Concubine" ranks first place in bookings"
by HanCinema is licensed under a Creative Commons Attribution-Share Alike 3.0 Unported License.
Based on a work from this source