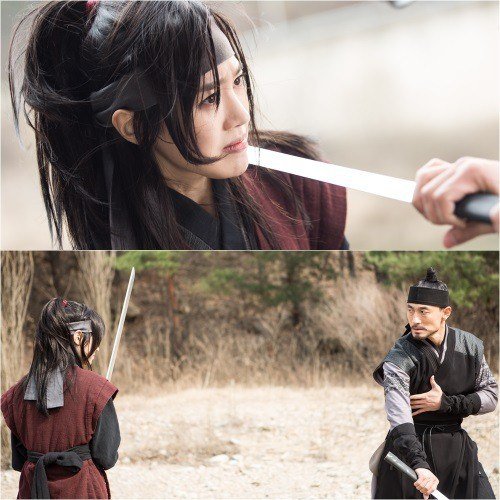 "The Flower in Prison" is a historical adventure drama about a genius girl born in a prison and a mysterious character named Yoon Tae-won. This drama is written by director Lee Byeong-hoon and writer Choi Wan-gyoo.

The stills show Jin Se-yeon in the wild, looking boyish in her warrior uniform and swaying around a sword. Jin Se-yeon and Seo Beom-sik have a certain distance from each other.

In another picture, Jin Se-yeon has a blade to her neck. She's glaring at her opponent with fierce eyes.

This scene was taken in Wolryubong in Yeongdong and it was Jin Se-yeon's first action scene. Jin Se-yeon takes on the role of Ok-nyeo, a brilliant girl who knows how to fight like a warrior.

Jin Se-yeon proved she was fit for this role by flinging around a heavy sword at her own will. She didn't forget to put on a look for her eyes and created a dynamic scene.

Kim Jong Hak Productions claimed Jin Se-yeon is doing her best and she's been very willing about the action scenes.

Meanwhile, "The Flower in Prison" will be seen on the 30th of April.

""The Flower in Prison" Jin Se-yeon's powerful action scenes"
by HanCinema is licensed under a Creative Commons Attribution-Share Alike 3.0 Unported License.
Based on a work from this source