"The Game: Towards Zero", "Tell Me What You Saw" and "The Cursed" - Clairvoyance, Memory Skills and Curse vs Demons 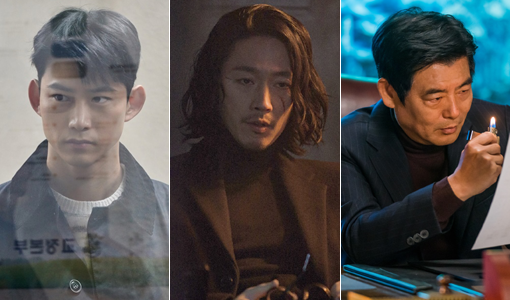 This cold and wintry February, there has been a sudden gust of thriller wind. They're breaking the stereotype that 'thrillers are for summer'.

MBC drama "The Game: Towards Zero", tvN drama "The Cursed" and OCN's "Tell Me What You Saw" each deal with their own creepy killers.

"The Game: Towards Zero", which began first on the 22nd of last month, revolves around a man who has the power of foreseeing someone's death, and a detective. They team up to solve a 20-year-old murder case. Ok Taecyeon takes on the role of the psychic, while Lee Yeon-hee is the detective. The thriller is a combination of supernatural powers and romance.

"Tell Me What You Saw", which began on the 1st of February, maximizes the dark atmosphere and tension, saving the strength of OCN, a channel that specializes in genre. It's a suspense thriller about a genius profiler (Jang Hyuk) who loses everything and a detective (Choi Soo-young) who remembers everything she sees once, tracking down a serial killer. The charismatic performance by Jin Seo-yeon as director of the Intelligence Crime Investigation Team and its eccentric profiler are getting good reviews.

"The Cursed" being written by director Yeon Sang-ho from "Train to Busan" and the fact that it's directed by Kim Yong-wan who made "Quick" and "Champion", teases the creation of a drama with a different style. "The Cursed" is a mystery thriller about Im Jin-hee (Uhm Ji-won), a righteous reporter trying to uncover the secrets of Korea's largest IT company, Forest, meeting So-jin (Jung Ji-so), a strong-spirited girl with special abilities, and fighting injustice.

There are more thrillers to come in March. Kim Seo-hyung stars in the SBS drama "Nobody Knows" and the tvN drama "Memorist", which is based on an original webtoon of the same name, are some examples.

A drama source explained, "The time where thrillers meant summer is gone. Now viewers' demand for genre-colored dramas is getting higher".

""The Game: Towards Zero", "Tell Me What You Saw" and "The Cursed" - Clairvoyance, Memory Skills and Curse vs Demons"
by HanCinema is licensed under a Creative Commons Attribution-Share Alike 3.0 Unported License.
Based on a work from this source